The Final Word (for now) on Homemade Hard Cider

Thoughts about our first batch of cider. 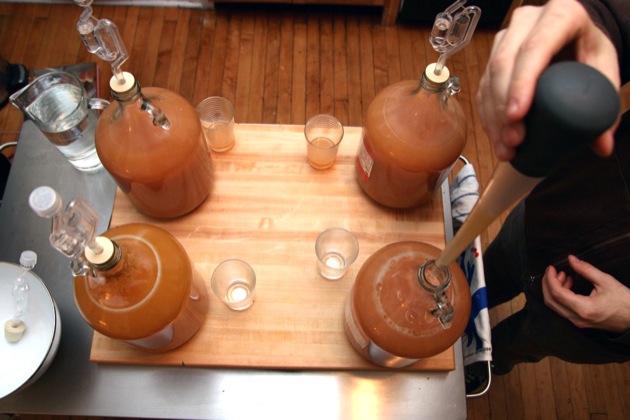 There is no feeling in the world like popping open a batch of cider and realizing what you have created alcohol. It's really hard to describe. We've made all kinds of recipes before, including some meals that have taken days to prepare. But alcohol always seemed a little unreal, and dangerous. Making alcohol always felt too technical and lab-like. And if you're brewing beer, that's sort of true: you'll need a lot of ingredients, and don't you need hi-tech equipment and precision tools? The fact that we could make hard apple cider simply and humbly was inspiring.

We have have been attempting to make our own cider using a what amounts to a jug of $7 organic juice from Whole Foods, a packet of yeast, and equipment we bought from the brewery store for a grand total of about $2. Not sure what recipe to use, we decided to make four different batches, which we detailed on our last post . We plugged those guys up with airlocks and felt rather proud of ourselves. But when would they be done? Were they supposed to ferment for two days or two weeks? And of course, what would they taste like?

Yes, it got a bit serious when we realized that we actually had to drink the experiment. We went from hopeful of a heavenly brew to apprehension that the cider would simply be underwhelming, and then to a vague worry that this homemade cider might try to poison us.

Brian from Daily Ikuru, a brew guru, gave me this bit of frank advice: "Drinking it today, a week from now, or even two weeks from now isn't going to kill you, you know."

Yes, that was probably true.  And so we got our turkey baster out early this year, and plunged it in to have a taste. 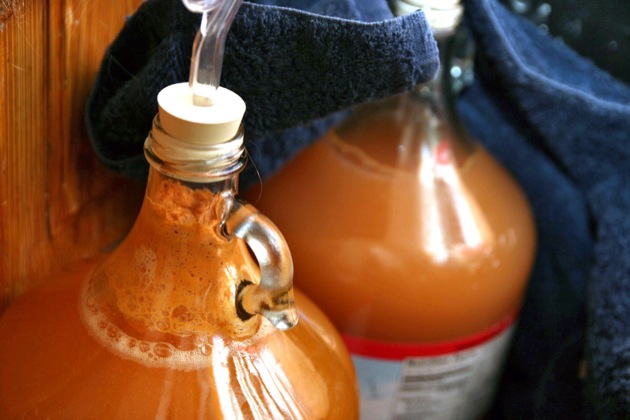 We have lots of tasting notes from various stages, but it's all a lot of information. The jist is that three days in the cider tasted fresh and feisty, but low in alcohol and not terribly complex . In the beginning, the champagne yeast really tasted the best; our lager yeast was overly beer-like and funky. But after a week there was a dramatic change. Both batches made with champagne yeast (1 with some added sugar) were drinkable, with a nice apple flavor, but they turned out pretty dry for our tastes. They were a bit thin-tasting and had a small amount of unpleasant bitterness. Still, having tasted these first, were were pretty happy about our results. 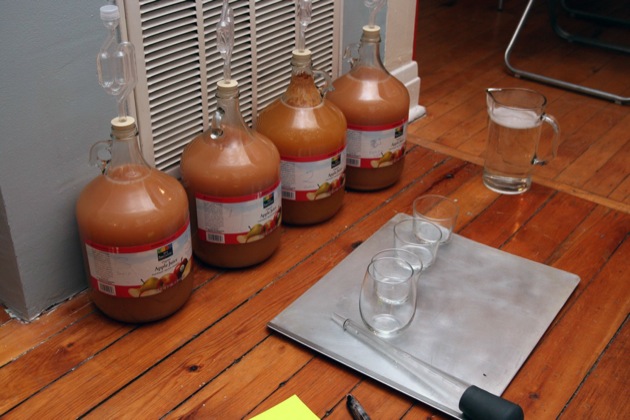 But then we tasted the baches made with lager yeast, and there was an unbelievable jump in quality and drinkability . It was slightly fizzy, with a wonderful apple-y flavor. It made Strongbow taste childish. The batch made with Seedling cider from the farmers' market, which was sweeter to begin with, was complex and had the most depth. But suprisingly enough, it was the batch made with the cheaper Whole Foods juice that amazed us. Partly because of how cheap it was, but mostly because of its clean apple taste. We'd stack that up against any imported English cider for a taste-test.  If we had more time and expertise, no doubt the Seedling cider has more potential for flavor and subtlety, being fresher juice never heat-pastuerized.  But for our buck and the simplicity of the process, the Whole Foods batch is the big story here. It's cheap ($6.99), comes in perfectly sized bottles for fermenting, and makes a balanced, refreshing beverage in about 7 to 10 days. That's not bad.

Once the batches taste right, the next step is to "cold crash" them, which means you transfer the bottles to a fridge and let them hang out for 2-3 days. It halts the fermentation process, and all the yeast sinks to the bottom. 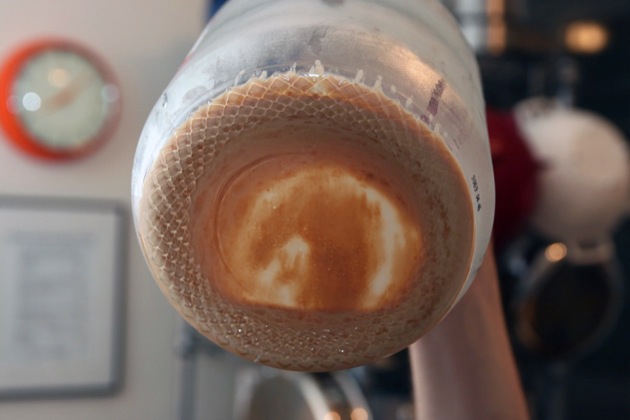 Then you get some siphoning equipment to transfer it to a second container, rinse out the yeast, and move it back to the original container. Now the cider can safely hang out for awhile: it can be bottled if you want to buy the appropriate equipment, or aged for months in the glass jugs.

Up until now, this whole cider making process has been rather reckless and carefree. Instead of taking classes, or making sure we had read every necessary resource, we decided the best way to learn was to try. That's true if you are also interested in making cider. But we hope this information, the availabilty of Whole Foods apple juice, and our very successful result has made the process that much more accessible.

Go forth and make cheap cider!