The Importance of Jus: Two Chickens in One Meal

How the most chickeny chicken dish imaginable. 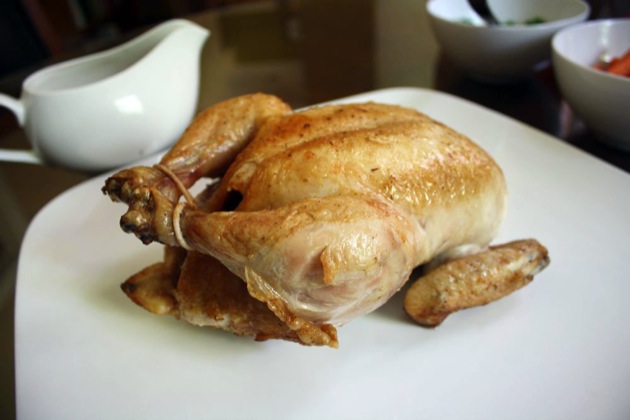 Every morning we would roast thirty-six chickens just for their juices, rather than for the meat...Thirty-six chicken provided enough juices for thirty portions of freshly cooked chicken. In other words, the customer had the juice of more than one whole chicken accompanying his dish...It was extreme.
- Marco Pierre White, Devil in the Kitchen

I started at 8 o'clock Sunday morning. I cranked the oven to 400 degrees and stuck in a chicken. When it was done, I tossed it in a colander set over a large bowl and smashed it with a spatula to try and unleash its juices. When that didn't work, I removed the skin from the hot bird and began ripping off hunks of meat and squashing the flesh with my bare hands.  When the meat was spent (dried and harried looking) I deglazed the roasting pan with a bit of water and wine and added that potent wash to the natural juices.  Then I roasted a second bird: this one to actually eat.

My goal was to try to figure out what Marco was going on about. His temper and rage are legendary ( click here for a Mario Batali's story about him ), and his book, Devil in the Kitchen , is an absolute riot. But the quote above has been bothering me for weeks in the best possible way. He didn't say he tossed chicken bones and bits in a pot and made a stock. Scraps and stock weren't good enough. He used the natural juices from the chicken, or what is also referred to as jus. To do so he had to literally ring a chicken of its moisture, leaving it lifeless and unservable.  In fact, he admits to often tossing the spent chicken in the trash, or dishing it out as staff lunches.  This was a whole chicken sacrificed for the benefit of a single diner. Oddly, I didn't wonder about the extravagance or the supreme wastefulness.

The only thing my brain could think about was what that must have tasted like .  I certainly couldn't afford to pay a fancy restaurant for the luxury of finding out.  No, the only way I was going to taste what a whole chicken's worth of juices did for a meal was to buy two chickens and find out for myself. 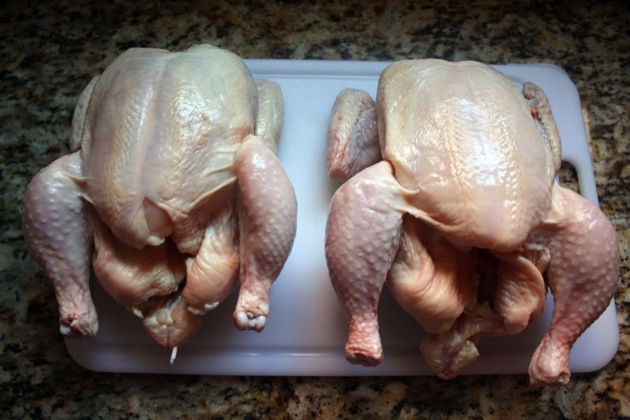 As inspiring as Marco's book was, it didn't actually have any recipes. For help, I used James Peterson's Sauces .  I was ready to reduce and reduce the jus, maybe meld it with butter and cream, and turn it into the grandest sauce of my life. Except that's not what James Peterson told me to do. In fact, that's exactly what he told me not to do: "Long, slow cooking is not always the best way to prepare a stock or jus with the flavor of a specific meat...much of the character, individuality, and freshness of the meat will be lost."

Instead he rhapsodizes about the jus, claiming its flavor "cannot be surpassed."  The jus is simply the liquid contained in the roasted meat.  "The problem," he admits, "that most often confronts professional chefs is that most roasts do not provide enough full-flavored jus to go around." This started to make sense. I was roasting a whole chicken for its juices, so I would have enough to accompany the second chicken.

He talked so highly of the jus that I gave up on adding anything to it.  I was struck by his explanation of what French sauces should attain to do.

"In the seventeenth century, French cooking began to distinguish itself from that of the rest of Europe...Particularly important to sauce making was the notion that food should taste of itself...Sauces began to concentrate and emphasize the flavor of a particular dish rather than accent or distort it."

It seemed to me that jus was kind of the perfect sauce, what every other one tried to attain.  The jus supposedly would make a chicken dish taste more like chicken.  It sounded like a ridiculous concept, and it brought about I Heart Huckabees -esque inner dialogue, "how could a chicken not taste like chicken?"  But I was in, and I had nothing left to do but serve the jus with a humble roast chicken to see if this ridiculous exercise was worth the expense.

The meal took me roughly 5 hours to complete. I nearly burnt my fingers on hot chicken juices. And because I had to buy two chickens, it cost me nearly twice as much as a normal roast chicken meal would.  But the results simply cannot be topped.

I was left with a sauce that tasted impractically of chicken. Every drop held the complexity and flavor of a bite chicken. It enhanced every morsel of the roast chicken, deepening the complexity and flavor.  This meal was definitely the most wonderful chicken dish I'd ever eaten, and yet there was no acid or spice.  It just tasted like a chicken in the most wonderful way possible.  I didn't even add salt or pepper until I sat down to eat. Of course, it's expensive, impractical, and kind of wasteful.  But I actually only spent about twenty dollars for this meal, which is far less than I would have spent had my wife and I gone out for pizza, let alone gone out for a similarly prepared chicken dish.  That's kind of miraculous. 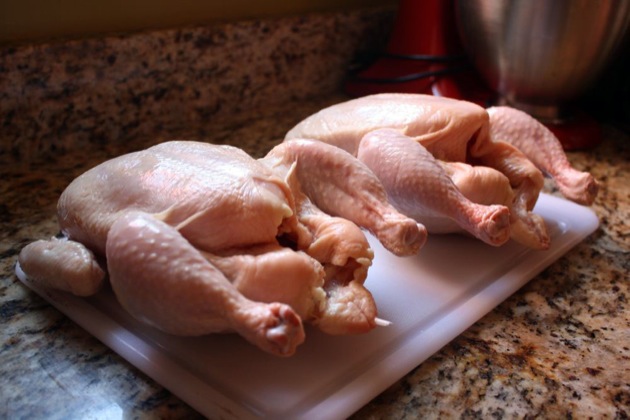 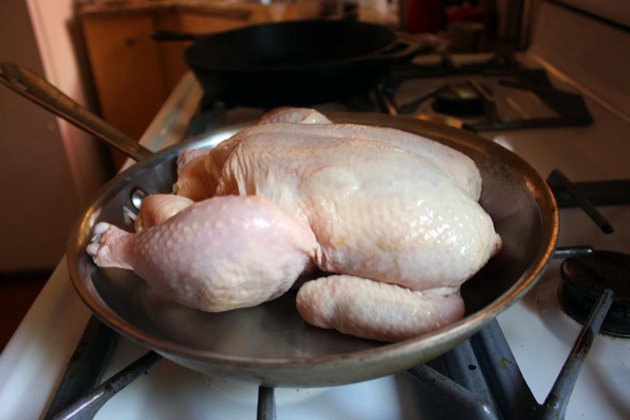 Preheat the oven to 400 degrees. Set one chicken in a small roasting pan or skillet and cook for 1 hour.  Do not salt and pepper it. 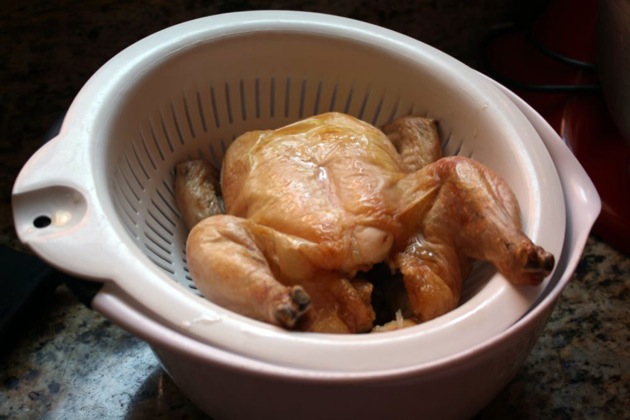 Remove the chicken and set in a colander set over a large bowl. Remove as much of the natural juices as possible. 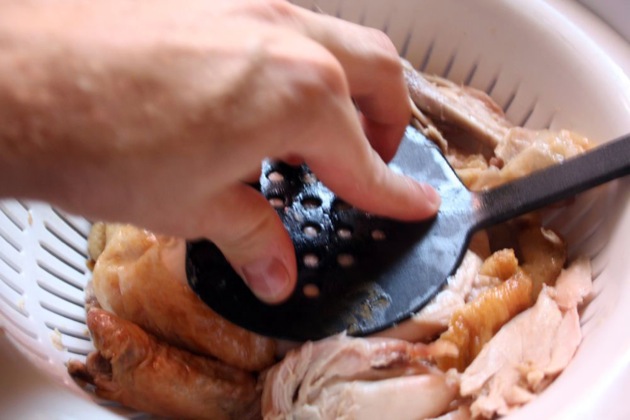 At first, I tried to do this by pressing with a large spatula. 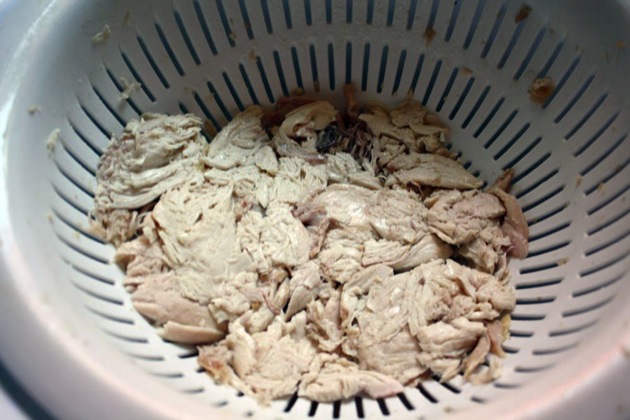 I found the easiest way was to let the bird cool for 10 minutes or so, remove the skin, and then squeeze the flesh with my hands. 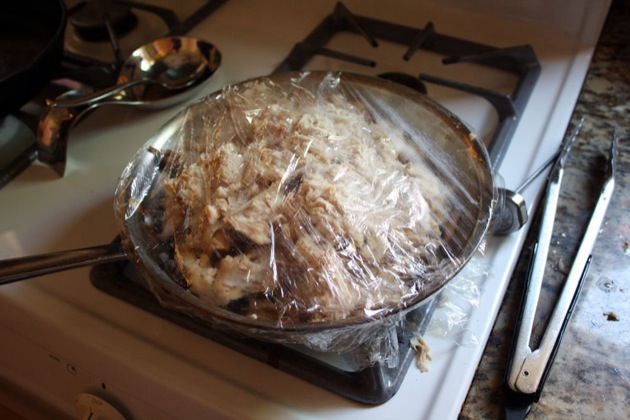 Return all the squeezed meat and bones back to the roasting pan. Cover with plastic wrap and let steam for 10 minutes. Then attempt to remove as much liquid as possible from the meat, once again.  This step was something Marco advised.  He thought the steaming process unleashed even more juice from the meat.  I didn't seem to get much juice out of the second squeezing.

Marco would have discarded this spent chicken, or served it to underlings, but I actually transferred all the parts to a large pot and made a wonderful stock out of it.

Heat the pan over medium heat. Pour off any extra fat. Deglaze the pan with a 1 tablespoon of white wine, dislodging any bits you can. When that has evaporated, pour in 2 tablespoons of water. When all the browned bits have been dislodged pour this through the colander into the bowl with all the natural juice. 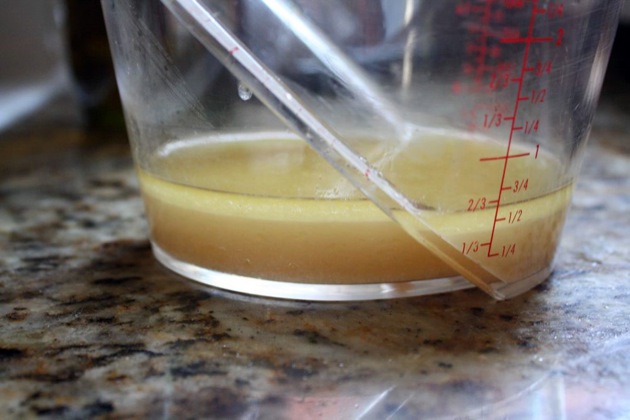 I didn't have much show for the trouble, but it didn't matter in the end. 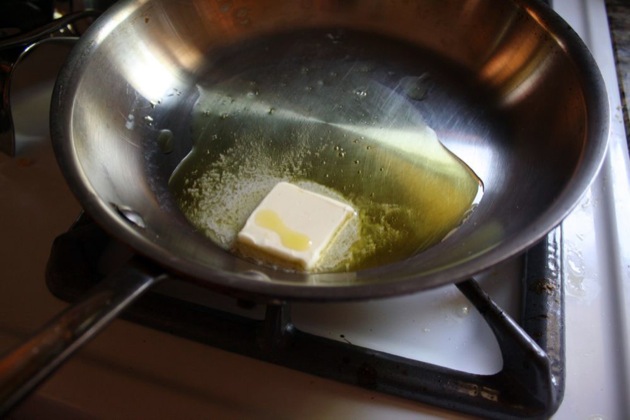 Clean the skillet. Then add the olive oil and butter, and turn the heat to medium-high. 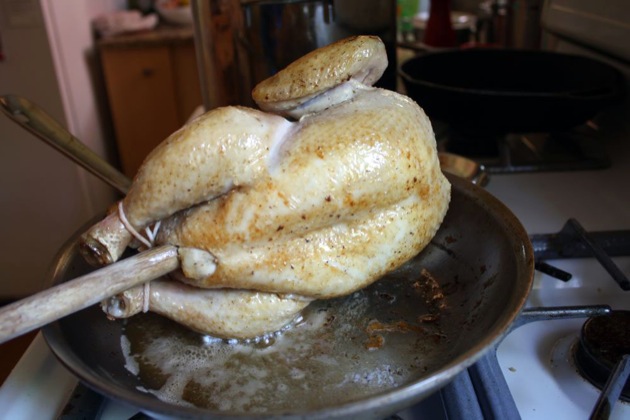 Truss the other chicken with butcher's twine and dry the skin with some paper towels. Brown the chicken in the skillet on all sides. I found the easiest way was to stick a wooden spoon into the cavity and prop it up against the side of the pan.  When browned on all sides, set the chicken aside and pour off the fat from the skillet. 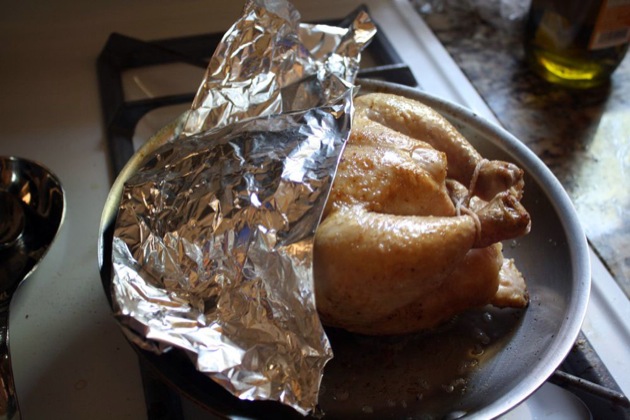 Return the chicken to the skillet, breast side up.  Place a piece of aluminum foil over the breasts.  Set the pan in the oven and cook for 30 minutes.  Remove the foil and roast for 20 minutes more. 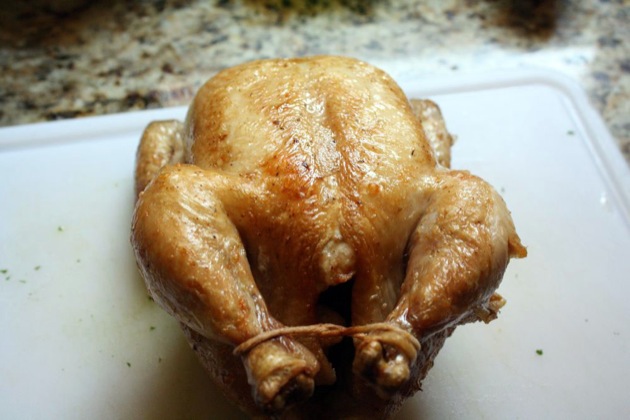 Poke the thighs of the chicken with a knife and if the juices run clear then it is done.  Set the chicken aside. 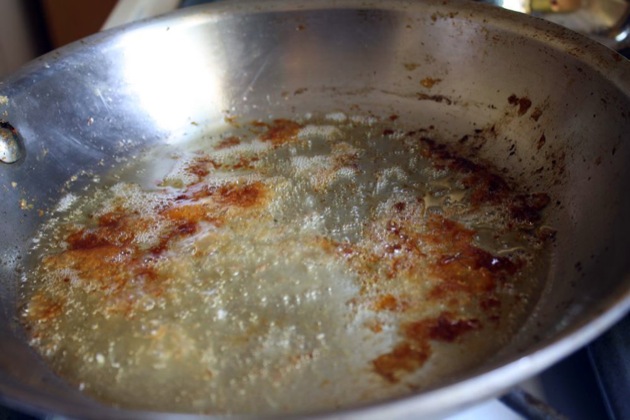 Set the pan over medium heat.  Warm it until the juices caramelize, but don't burn.  The liquid left on top is mostly fat.  Discard it.  You are after the browned bits. 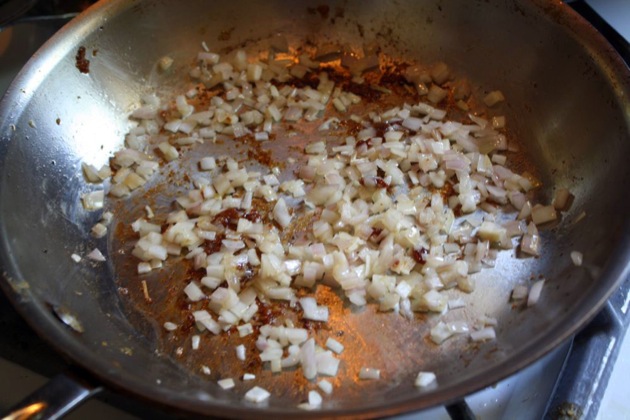 Add the chopped shallots.  Cook for about a minute, stirring often, until the shallots are aromatic. 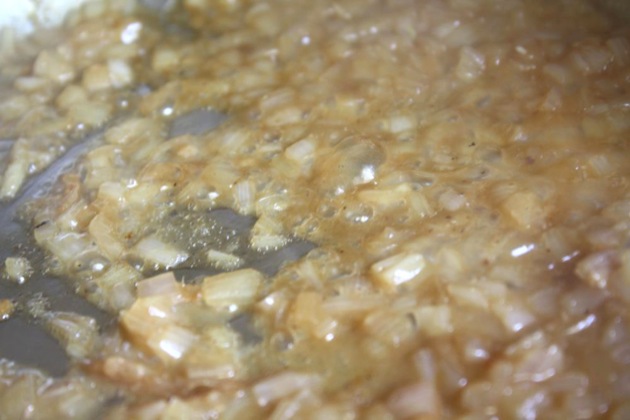 Add 2 tablespoons of the wine along with 6 tablespoons chicken stock or water.  Scrap the bottom of the pan with a wooden spoon, dislodging any browned bits.  Let the liquid reduce until it is syrupy. 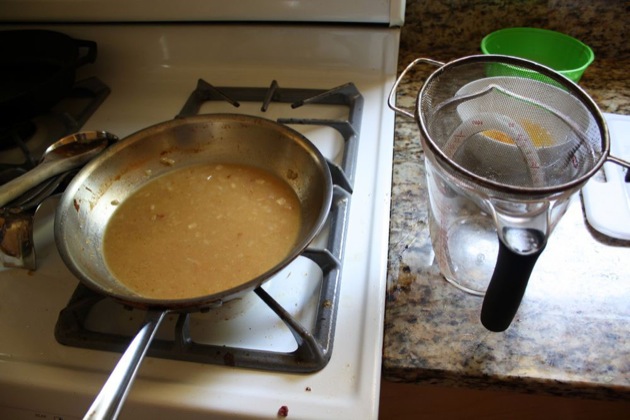 Pour in the jus, turn the heat to low, and stir until incorporated.  Turn off the heat.  Strain the juice through a metal sieve.   You don't want to reduce the sauce. 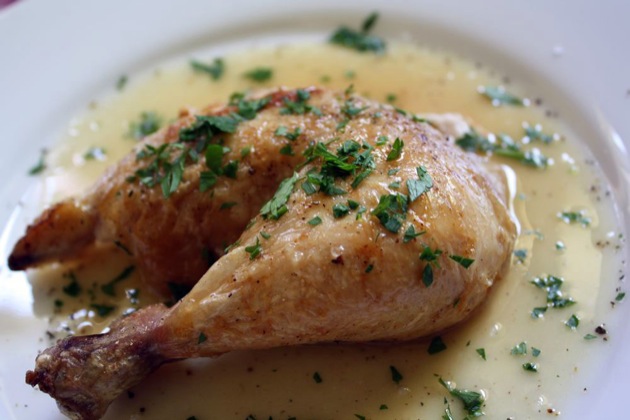 Serve the jus with the roasted chicken.  Add a sprinkling of parsley for a touch of freshness.  Season the chicken with salt and pepper.