What to pair with North Carolina-style barbecue. 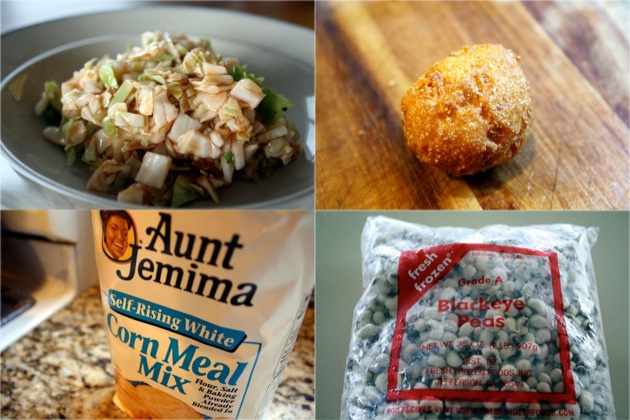 The crisp bite of coleslaw, the crunchy crust of freshly fried hushpuppies, and the porky punch of black eyed peas: I realized after a mad dash through the barbecue trail in North Carolina that these were not just side dishes, but essentials. Without them my meals would have fallen apart, lost in meat gluttony. They helped achieve a barbecue balance, where everything complimented and heightened the taste of each other. I couldn't imagine eating chopped pork without them on my plate.

After my trip and a few days of self-imposed pork detox, I decided to make a great feast for my family at the beach in North Carolina using all the knowledge I had gained on my trip.  I already had an awesome pork shoulder recipe that I made last year. But I quickly realized that I absolutely had to include these side dishes, as well.  They were too important to leave behind. For help I looked back over my barbecue tour to see where I found the best examples of each dish. Just as I had personal pork preferences with each of the places I visited, I came to have favorites for each of these side dishes, too.

The taste of barbecue seems incomplete without these dishes.  Luckily, all three are remarkably easy to make and, most importantly, incredibly cheap. 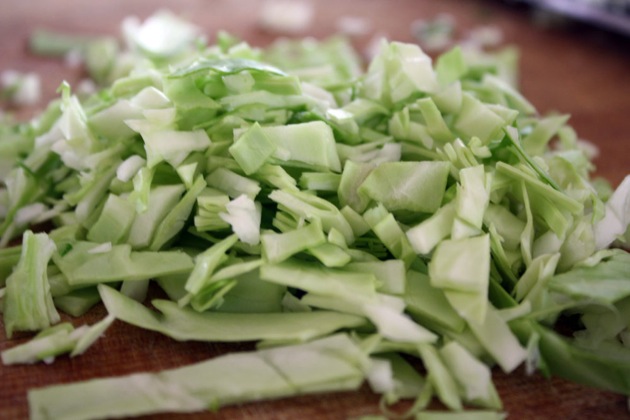 Though I admit I was a tad more taken with the barbecue I encountered in the Eastern part of the state, and the vinegar based sauce, I did become absolutely smitten with the red slaw found in the West. The vinegar base of the slaw is a normal one, but the addition of ketchup is not. How could that work? The only thing I can figure out is that it is the perfect foil for the fatty meat.  But that still didn't explain why every bite made me smile. 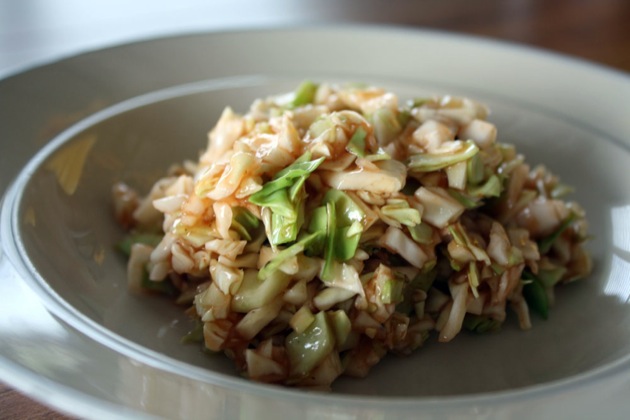 I found this recipe in Peace, Love, & Barbecue . Mills claims that he got the ingredients from the owner of Lexington Barbecue, Wayne Monk, but not the proportions. What Mills came up with is awfully close. Whisk together 1/2 cup apple cider vinegar , 1/4 cup sugar , 1/2 cup ketchup , and 1/2 teaspoon salt in a small bowl until the sugar dissolves. Chop 6 cups of green cabbage . Toss in a large bowl and pour on the dressing. Add 1 teaspoon ground black pepper and a few dashes of hot sauce . Toss well and refrigerate until cool. 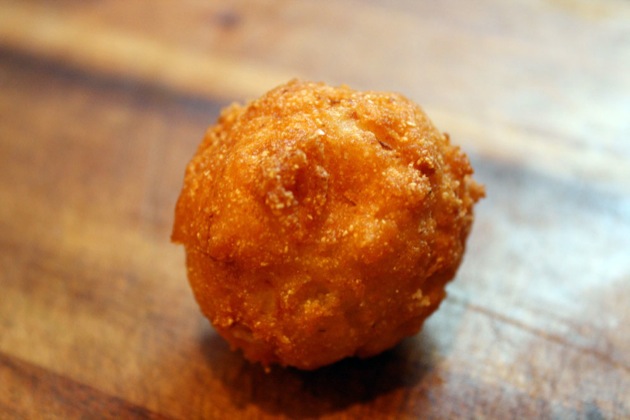 Most of the hushpuppies I encountered were long, finger-like, and almost uniformly delicious.  I especially loved the ones at Wilber's that could be dunked in thick chicken gravy. But there was one place that raised the humble fired snack into another gastronomic realm: Allen & Son's hushpuppies were spherical and had an incredible crust that gave way to a creamy, buttermilk soaked interior. I never knew the humble hushpuppy could be transcendent.

I immediately asked the waitress whether she knew what was in the hushpuppy, and she said that one of the main ingredients was buttermilk.  So I kept an eye out for any recipe that prominently used buttermilk, and discarded the rest.  Fortunately, I found this recipe on eGullet , which was apparently "developed by Malawry for her culinary school final." Can't argue with that kind of research. It's not quite as creamy on the inside as the version at Allen & Son, but they were nicely crunchy and had a distinct savory bite thanks to the chopped onions. Heat a pot of oil to 340 degrees. Take a heaping tablespoon of the mixture and form into a small ball. Gently drop into the oil and cook for 3 to 4 minutes, turning it occasionally so it browns evenly. 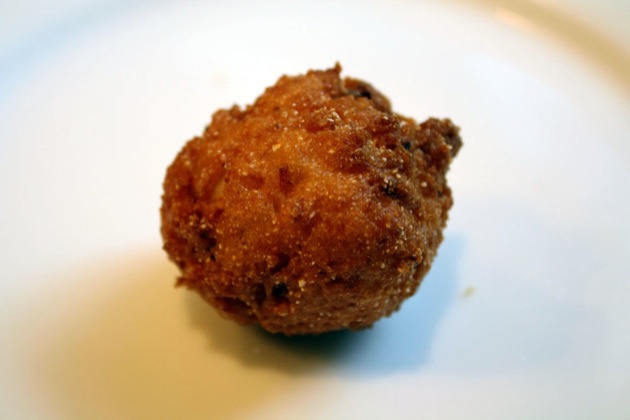 Remove when golden brown and stash in a 200 degree oven until you finish the rest.  Most of mine needed the full 4 minutes of frying. 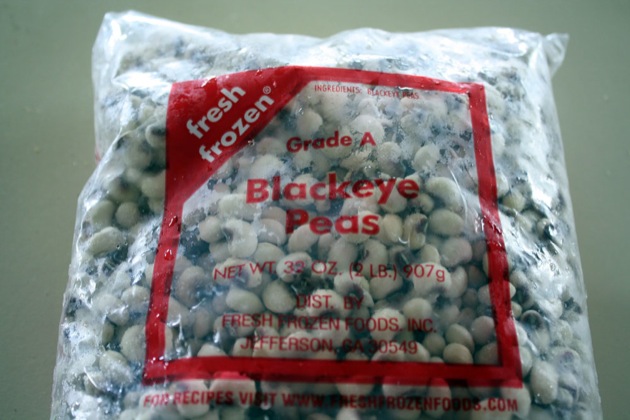 I only encountered these at the The Pit in Raliegh, but I wish I'd been stuffing myself on them all day. They were creamy, and infused with loads of--what else!--pork.  I just loved how they added a different texture to the plate.  To my good fortune, I found a recipe in Peace, Love, & Barbeuce for black-eyed peas (or are they blackeye peas??) from Ed Mitchell, who happens to own The Pit.

I'd never cooked with them before, and worried I wouldn't be able to find them easily. Luckily I picked up a bag at Randy's Meat Center , a stylized New York deli, that's owned by an actual former New Yorker.  He spotted me early as I was wearing my Slice t-shirt (Hasta la Pizza!) and said, "Why you wearing that shirt?  The pizza down here is crap."  When I explained I got it in New York he told me that he happened to be from Brooklyn, and was a police officer in the exact neighborhood I used to live in. Anyway, I found a frozen bag of black-eyed peas, which Mike Mills recommends using anyway, along with an enormous pork shoulder.  I was set to go. 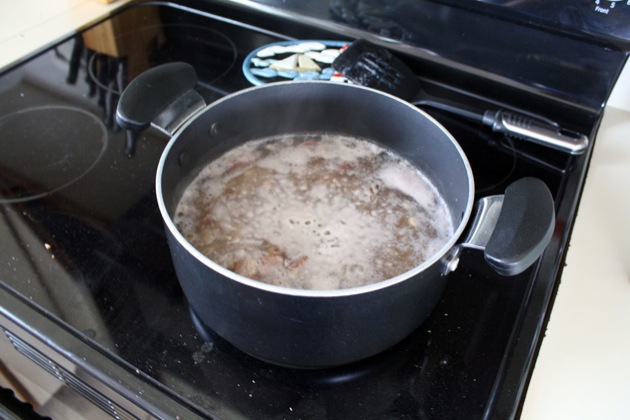 Pour 3 cups of water into a large pot. Add 1 16-ounce package of frozen black eyed peas and 1 ham steak (1/2 pound) or the same weight of accumulated pork parts. Bring to a boil and then reduce the heat to a simmer and cook for 2 hours.

Add 1/4 cup chopped onion , 3/4 teaspoon salt , 1/2 teaspoon black pepper , and 1/2 chopped jalapeno . Whisk together 1 tablespoon of flour with 1/4 cup cold water . Stir into the pot. Cook at a simmer for an additional 30 minutes. 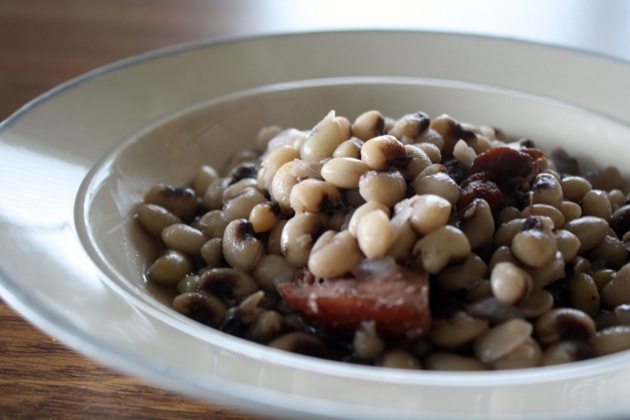 Taste to make sure the peas are tender.  Serve all of these side dishes with pulled or chopped barbecue pork .