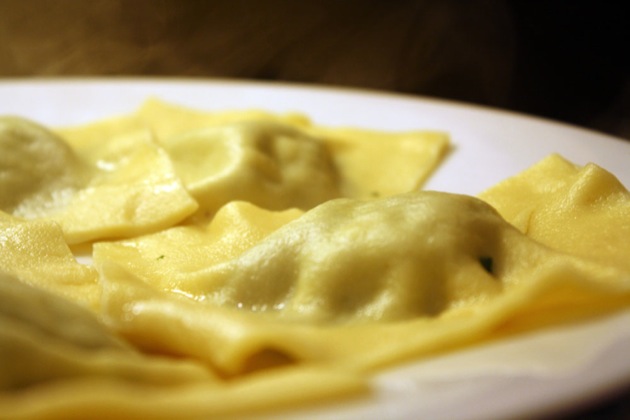 How long do you cook ravioli?  I wondered this precisely the moment after I plunged my handmade ravioli into a raging cauldron of boiling water. It didn't occur to me that it might be an issue. I had always thought you pulled them as soon as they floated, or was that just gnocchi? When I consulted my recipe in The Silver Spoon it said I needed to cook them for 10 minutes, which sounded absurd. I had only cooked my homemade tagliatelle for 2-3 minutes. But I checked with Saveur and one of their recipes said the same thing. I kept checking. Jamie Oliver's Cook with Jamie recommended just 3 1/2 minutes. To make matters more confusing, in the back of the Silver Spoon they feature modern Italian menus by popular chefs, and most of them said to cook it for 2-3 minutes. What?

This is obviously retribution.  I thought I had mastered fresh pasta and could do no wrong.  After lots of success with , I figured ravioli couldn't possibly be that hard.  You just put a bit of filling atop one sheet of freshly rolled pasta, and lay another sheet on top.  Haphazardly cut out the shapes, toss them in water, and they are done.   I really should have known better.  One of our biggest failures in the history of this site was Blake and I trying to make ravioli.  But the problems we experienced before all related to the thinness of pasta, something I did not have to worry about now with my gleaming new pasta maker.  All I had to do was roll the dough out on the smallest setting at it was ready to go.  So, I whipped up a batch of ravioli with spinach and ricotta filling and was rolling right along until I tossed them in the boiling water. 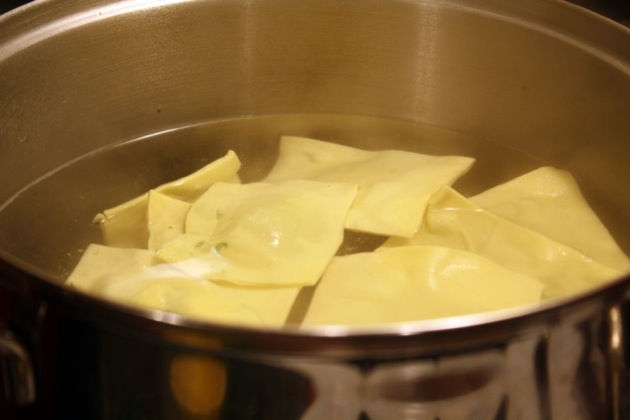 It was Abby who suggested pulling them out at intervals, to see precisely when they were done.  So, as often is the case at my household, a nice relaxing dinner turned into a science experiment.   The pasta started floating at the 2 minute mark, but the pieces were hard and dry, especially the outer part of the ravioli.  At the 4 minute mark I noticed a slight difference, but it wasn't until the 6 minute mark that I noticed a big change.  The parts that covered the filling became tender and soft.  The edges were still much harder.  By 8 minutes the pasta covering the filling was perfect, tender and succulent, but the outer edges were still a mess.  It wasn't until 10 minutes that the edges began to loosen, but then the other parts of the pasta were over cooked.

I realize now that my biggest problem was the overlapping pasta sheets.  But now I just have more questions.  Should the filling come right up to the edge, or should there be a little overlap?  If the pasta separates the filling can just fall out.  But that would be a whole lot better than the nearly inedible edges of the pasta.  I found myself cutting the edges off, and giving them to my dog.

Obviously the size of the ravioli is important.  I realized afterwards that the recipes that called for a shorter cooking times made smaller raviolis, something that didn't occur to me in the heat of the moment.  I suppose next time I'll try making smaller bite-sized pieces. It's still hard to shake the failure.  They weren't awful, but after such success making basic fresh pasta I had hoped I could easily make this jump.

Anyone know a great place to start for a ravioli novice? 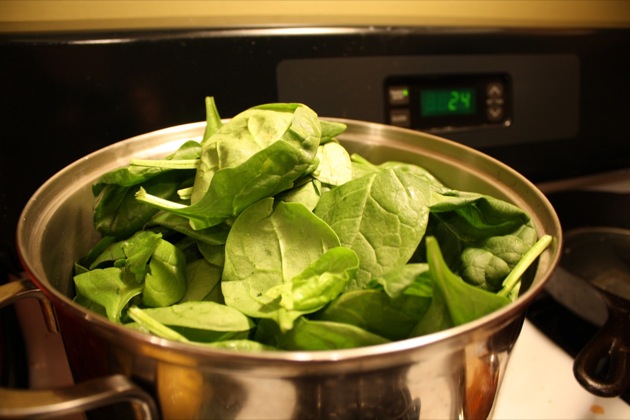 Rinse 1 1/2 pounds of spinach with water and then toss it in a large pot with out drying it.  Cook over medium heat until the spinach wilts and reduces dramatically in size, about 5 minutes.  Add more water if it is too dry and burning on the bottom of the pot.  When done transfer the spinach to a colander and let it drain.  Press more water out with paper towels until the spinach is relatively dry.  Then chop on a cutting board. 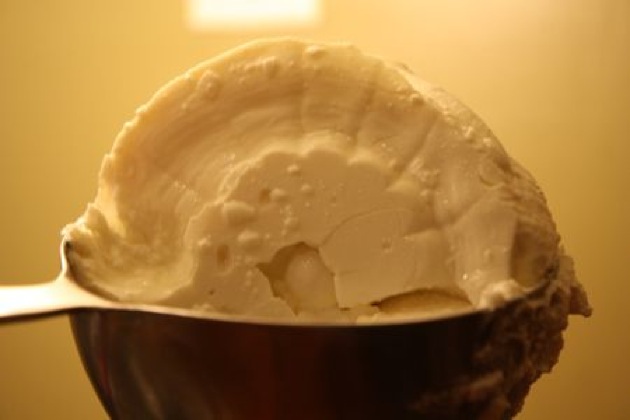 Dump the chopped spinach in a large bowl and add 3/4 cup of ricotta cheese, 1 egg, a small handful of parmesan, and a sprinkling of salt.  Stir until well combined. 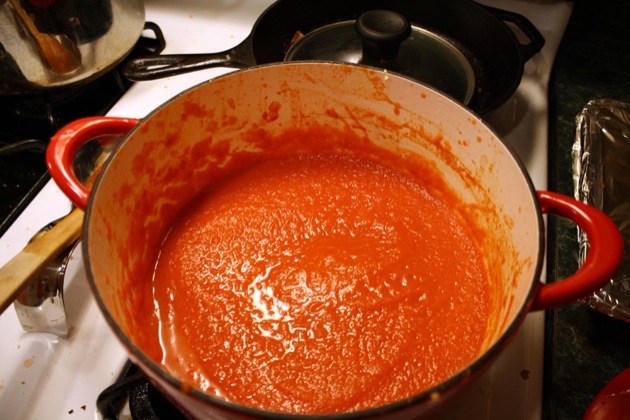 For a sauce I used this marinara sauce from Saveur.  It was quite good. 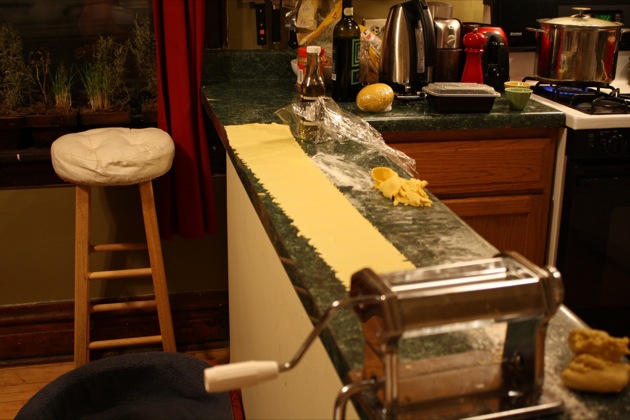 I made the pasta dough exactly like I had when making tagliatelle , except that instead of stopping at the second to the last setting, I put the dough through that last setting to get it as thin as possible.

I placed about 1 tablespoon of the spinach filling at regular intervals.  Around the edges of the filling I brushed a little water on for a seal. 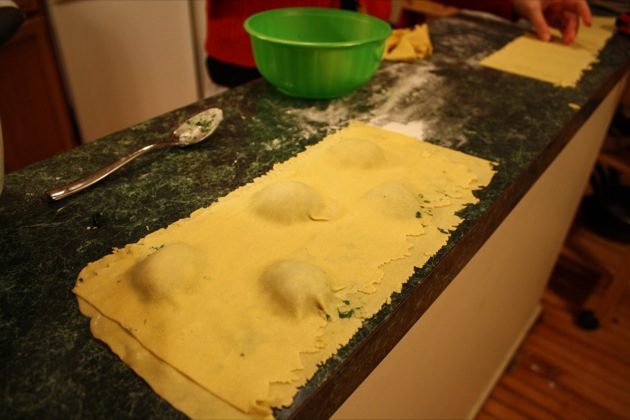 Then I put another sheet of pasta on top. 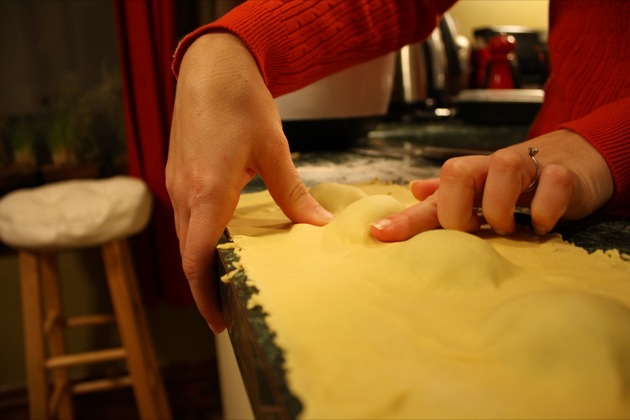 Carefully my wife and I tried to from them into raviolis, removing as much air as possible from the filling. 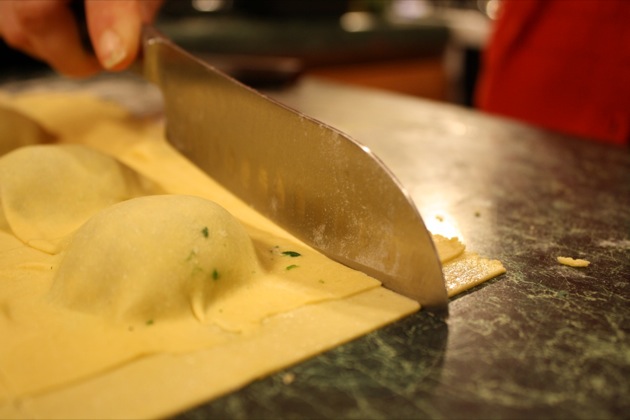 Then we cut them into as much of a square as we could manage. 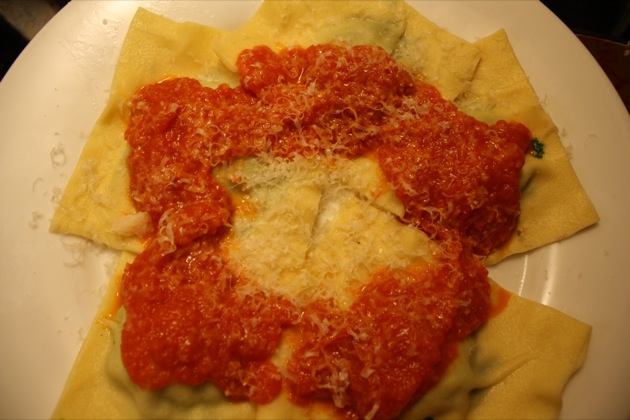 We topped them with a little of the tomato sauce and sprinkling of Parmesan cheese.