Substituting brandy in this variation on a classic cocktail.

Making cocktails is a tricky business. The balance--between sour and sweet, harsh and smooth--can easily be lost if one isn't careful; most recipes are so expertly calibrated that making any kind of substitution is a bad idea. A cocktail is often a significant investment that goes down the drain if you screw it up (or in my case, gulped down with a wince because I am incapable of admitting defeat). Some rarer cocktail ingredients are expensive, and so making a bad cocktail is especially disappointing when you are literally pouring money down the drain.

So I was surprised and also a bit suspicious when reading through this month's Saveur, where a writeup of a new Cruzan Single Barrel Rum casually mentioned that it would be "delicious in a sidecar." A rum sidecar? An honest sidecar is built from cognac, triple sec and lemon juice. Would rum fit in? It seemed novel and obvious at the same time. But that feeling of shaking up a cocktail until your fingers are numb, carefully measuring out ingredients, only to be left with an undrinkable concoction? Not interested.

So I started researching this "rum sidecar" I immediately found a recipe by cocktail authority Dave Wondrich in Esquire, which meant that maybe there was something to be said for this variation on a classic. He admits that simply replacing the liquor in a drink is poor creative inspiration indeed--especially if you fail to come up with a new name and simply called it the "rum" whatever or the "vodka martini"--but this drink is to close to the original and good enough that he's happy enough with the name.

So is this a classic coctkail? It certainly follows the classic formula. Like the margarita or the dacquiri, it has three parts--booze, citrus, and sweet--, which are carefully balanced to achieve cocktail greatness. The daiquiri is rum, lime juice, and simple syrup; the margarita replaces the rum with tequila and the simple syrup with triple sec. The sidecar is much the same, with brandy, lemon juice, and triple sec.

And it turns out rum makes a pretty great substitute for the brandy , softening the drink and making it a little sweeter. It's also a lot cheaper; I used a bottle of $17 2-year aged Cruzan rum for mine. I've seen some recipes calling for white rum, which probably tastes fine, but a golden, darker rum makes more sense to me, which usually indicates that it's been aged. This puts it in the same league as the original recipe's brandy, which is complex and flavorful.

It's early still, but it is Friday.  The rum sidecar is a great way to kick off the weekend. 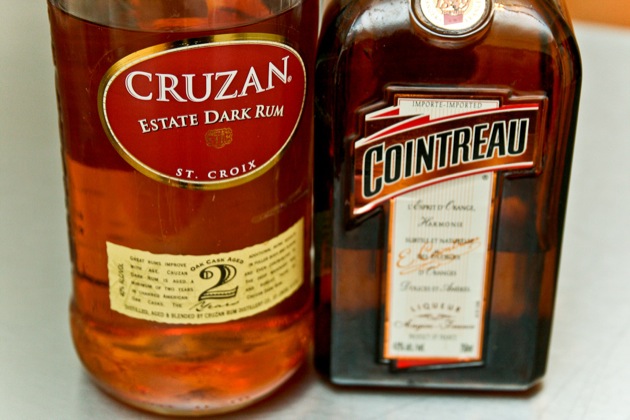 In a cocktail shaker combine the ingredients with cracked ice and shake vigorously, then strain into a chilled cocktail glass with its rim rubbed with lemon lemon juice then dipped into sugar.