The Young Man and the Cocktail

The perfection introduction to mixed drinks. 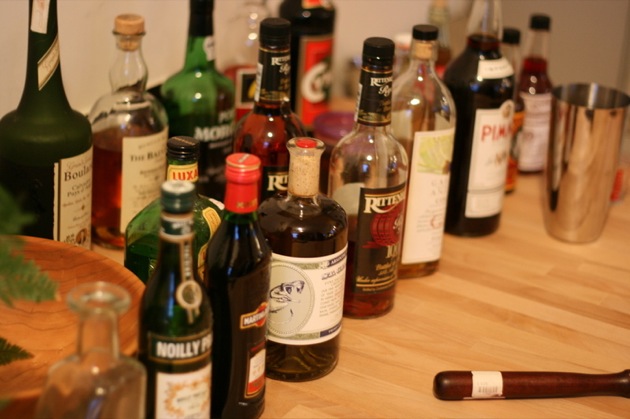 Over the past year or so, Nick and I have developed a kind of unhealthy obsession with cocktails -- some could argue literally.  We've quietly stocked our cabinets with liquers, liquors, bitters; our fridge doors are weighed down with vermouths (yes, they should be refrigerated ) and simple syrups; a regular supply of rye whiskey, bourbon and gin comes and goes, mixed with a recurring stockpile of freshly-squeezed citrus juices and the occasional maraschino cherry.  We're a couple of young guys won over by an old man's art.  Nick and Nora of The Thin Man are like long lost friends.

It began when Nick tended store over at LeNell's , a tiny boutique liquor store that still manages to feel rambling, in the remote Red Hook section of Brooklyn, where they stock more bourbons than anywhere else in the city.  The people who come to LeNell's either live nearby or really care about their liquor.  LeNell Smothers taught Nick a couple things about the subtle art of the cocktail, beginning with the proper base for a Manhattan (rye whiskey) and how to make an Old Fashioned , a cocktail for which there is no simpler alternative.  So it started with whiskey, but it proceeded to other brown liquors like cognac, then to gin (Gin Fizzes, Gin Rickeys, Gimlets -- there's so much more to life than tonic).  So far, it's stayed there -- we don't know much about rum, and we only touch vodka on Sunday mornings when it's hanging out with lots of tomato juice, horseradish, and a celery stick.  But you can make a heck of a lot of cocktails, many of the classic (and best) ones, with just whiskey and gin. 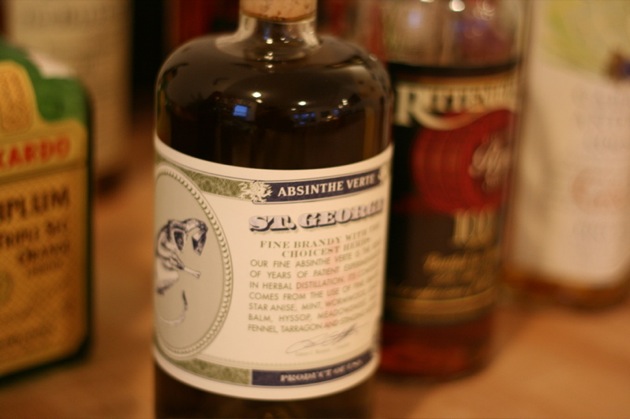 What is it about cocktails?  Possibly their elegance.  Their exactness, and the risk that a drink can be rubbish or sublime if the proportions aren't quite right.  And despite this exactness, there is a capacity for invention, for improvisation.  Cocktails are a substantial subject -- old, traditional, long-lost, yet somehow not snobbish.  There is a risk, a danger in drinking cocktails--to put it bluntly, they get you drunk quickly.  So there is this mysterious element to them, and the idea that you only get a drink or two to try before your mind starts to muddle.  The ingredients are expensive enough that making a bad cocktail is really frustrating; you never want to do it again.

Once in awhile I'll meet someone else who appreciates the art of the cocktail -- which was the impetus for the other night, when my old work buddy Simon and I started emailing about putting together an epic night of cocktails, the excuse being that he had lots of leftover booze from his wedding.   A phone call established the cocktail list, which was far larger than we would ever have time for, but we assigned ingredients nonetheless and began early.

By the end, we made Pink Ladies, Brambles, Dave Wondrich's Tombstone cocktail, Sidecars, Sazeracs, and most exciting, a traditional pouring of Absinthe , which has only recently become legal again.  There had been plans for Rye Manhattans with Orange Bitters, as well as a riff on a drink I've had at Franny's , what they call the Brooklyn, a mixture of whiskey, lemon juice, simple syrup, and sweet vermouth.  But we never got around to it.  Such is the danger of cocktail drinking.

Here are photos and recipes for what we made.

Our idea with this drink was to set the right light-hearted tone to the evening.  Unfortunately, we bought grenadine at the last minute, which turned out to be awful and cough syrupy, and had no actual  pomegranate juice in it.  Had we the time, we should have made our own grenadine , which is quite easy now that Pom juice is so widely available.  Nevertheless, this cocktail is a blast to make, featuring a raw egg white and as much shaking as your arm muscles and fingertips can bear.  The texture is foamy and pleasing. 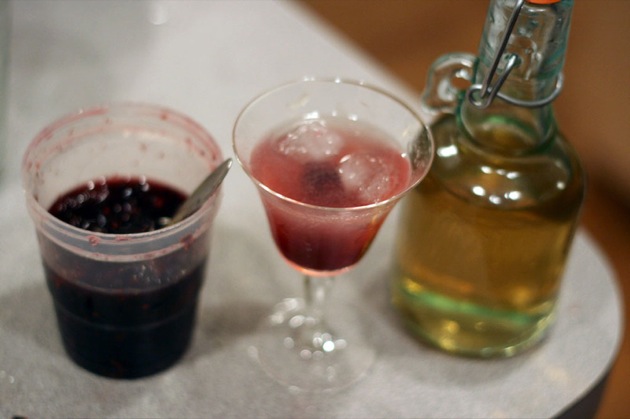 This is one of my all-time favorite recent cocktail finds.  Elin ordered it at a schmancy Christmas party last year, which was bartended by the lovely and gracious Cuff and Buttons , made up of former Milk and Honey bartenders, an exclusive and respected cocktail bar in the city.  Elin likes gin, but really wanted to try something besides tonic, and they made her one of these.  Traditionally made with Creme de Mure (a hard-to-find blackberry liquer), you can also just muddle blackberries in simple syrup and drizzle that instead.  By the way, never buy simple syrup -- just get a jar and fill it with 1:1 sugar and water, shake until dissolved, and keep it in fridge.

I stumbled on this cocktail in an eGullet forum, where I read that "cocktails don't get much simpler or better."  That statement, to me, is exactly what I look for in food and drink.  The use of demerara (sugar in the raw) simple syrup gives the rye whiskey a richer body, while the angostura bitters open up all the flavors.  A remarkable cocktail when made just right.

Sidecars are one of my favorite cocktails, totally refreshing and balanced.  I believe the legendary story was that somebody came into a bar in France after riding in a motorcycle sidecar, and wanted something to warm them.  They asked for cognac.  But since it was before dinner, the respectable bartender couldn't serve cognac, which was an after-dinner drink.  So to make it more acidic and refreshing, lemon juice was added; to balance it, Cointreu was used, a very sweet orange-flavored liquer.  The resulting drink was famous.  I make mine with Luxardo Triple Sec instead of Cointreau. 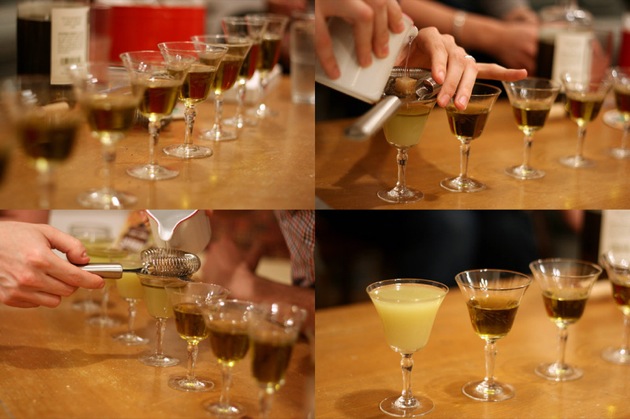 This was surely the highlight of the evening, when Simon opened his bottle of Absinthe.  The traditional way to pour it involves a sugar cube and a fancy spoon; we made it work with a cocktail strainer. Initially a translucent green color, the absinthe becomes opaque when topped with the sugar-filtered water, a remarkable transformation.  It sort of glows with this otherness, this just barely unnatural green.  The flavor was complex and heady, definitely not for the anise-hater, but any way you play it, a serious treat. 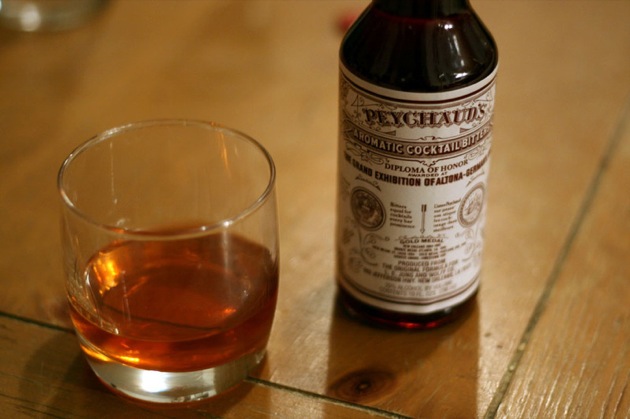 The final drink of the evening was the sazerac (well, techincally, we drank some port after), which is my favorite cocktail.  This is just a wonderful, wonderful drink.  Most lucky was the fact that we had Absinthe nearby -- the drink has been made with other anise liquers since absinthe has been illegal, like Pernod or Herbsaint or other pastis.  This was my first-ever real, true, Absinthe sazerac, and it was worth waiting for.  My recipe deviates just a bit from what the most a purist would recognize -- they would never put angostura bitters into a sazerac -- but I feel like it really opens the drink up.  The most important thing is to have Peychaud bitters.