Our solution for what to do with too many tomatoes 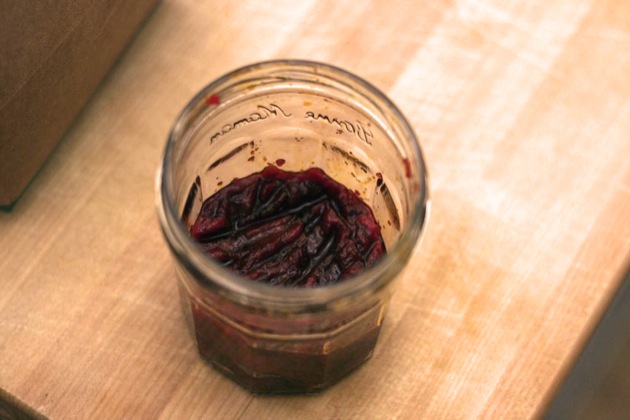 There isn't much argument that summertime is the peak season for cooking. It never gets easier than in August: the produce is top-notch, everywhere, and cheap. Locavores are finally settling down and enjoying themselves instead of passing judgement on the rest of us for buying zucchini out of season. You can make dinner by cutting up tomatoes and fresh mozzarella and calling it a masterpiece. My CSA vegetable delivery is overflowing with watermelon, cucumbers, and of course, tomatoes.

It's also the time when ambitious cooks get into things like pickling and canning to preserve the harvest. Which is how I ended up looking through old bookmarks and re-discovering a post on Food with Legs for Tomato Conserva, adapted from the very excellent Cooking By Hand , written by California chef Paul Bertolli.

The process was appealing for two reasons: one, and I am leaving town today for San Francisco, and I had a bag of tomatoes to use up. But more importantly, I've been trying to convince my wife for about a year now (which is as long as we've been married) that registering for a food mill was an absolutely necessary thing to do for our wedding. Our anniversary has come and gone, and it hasn't left its box. So it was time to use the damned thing, if for no other reason than to bolster my own arguments. 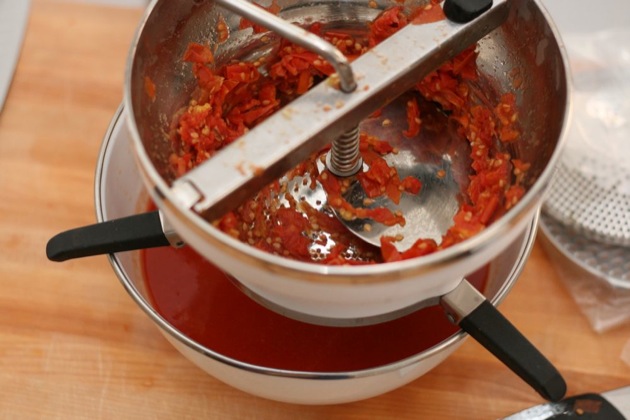 Tomato conserva is like homemade tomato paste, except it has none of the metallic edge, and it has a fancy Italian name.  The flavor is exceptional, super deep and tomato-ey (sorry, that's the best word there is) and if you keep it in the fridge under a layer of olive oil, it will last for quite some time, according to Bertolli. You use it like a condiment: spread on grilled slices of baguette with fresh goat cheese, dolloped into a nice bowl of white risotto, or used anywhere you might employ tomato paste to add a richer, fuller flavor to a sauce. Bertolli also mentions an intriguing idea, stirring it into the dough for fresh pasta to make a red-hued noodle.

But when I saw this, what I had most on my mind was homemade ketchup. 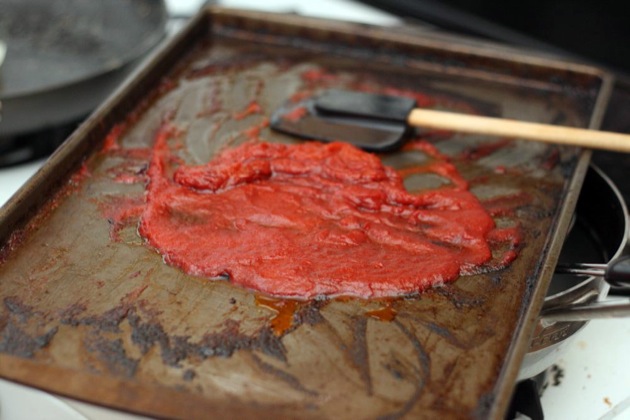 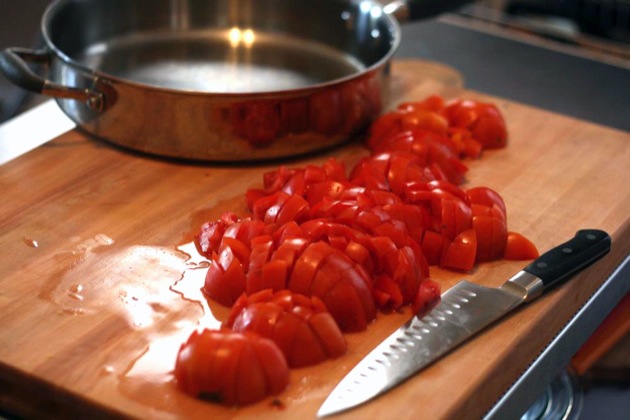 Adapted from Paul Bertolli via Food with Legs

Do you need a food mill to make tomato conserva? No. You could instead peel the tomatoes first (the best way is to drop them in boiling water for 15-20 seconds, then quickly move them to a bowl of ice water to stop the cooking; the skins should easily slip off) and accept the presence of seeds. Or, you could peel them and proceed with the recipe, pushing the tomatoes through a strainer instead of a food mill to remove seeds. The big advantage of the food mill is that it can get rid of the seeds and the skins together. 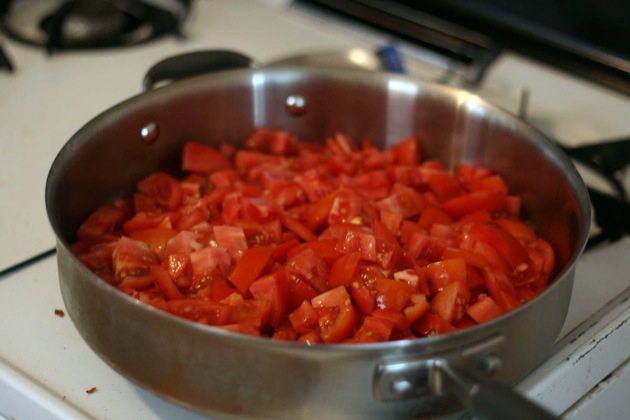 Roughly chop the tomatoes. In a large skillet with high sides (so the tomatoes don't spill everywhere), heat a few tablespoons of olive oil over medium heat, then add the tomatoes. Bring the mixture to a boil as they release water, and boil for 2 minutes. 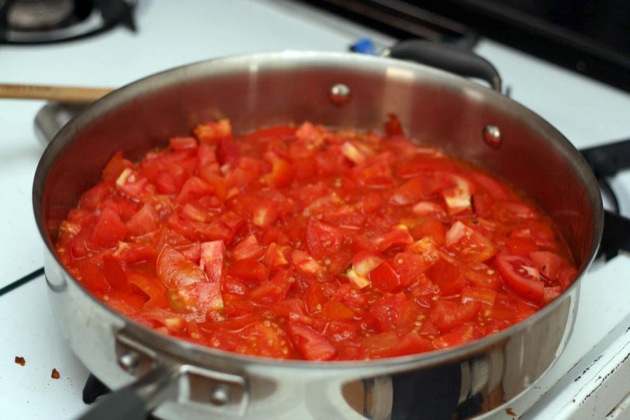 Dump it into a food mill with the smallest plate and crank it through into a bowl. You should have a sort of tomato liquid.

Spread a little more olive oil onto a sheet pan and carefully pour the tomato mixture into the pan. 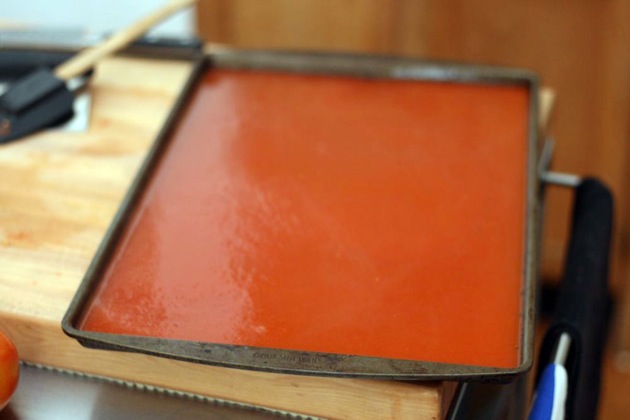 Transfer to a 300 degree oven and cook for 1-2 hours, until the edges of the pan are beginning to caramelize, then lower the heat to 200 degrees and cook for an additional 2 hours until the mixture is deep red (brick colored), fairly dry, and almost shiny. 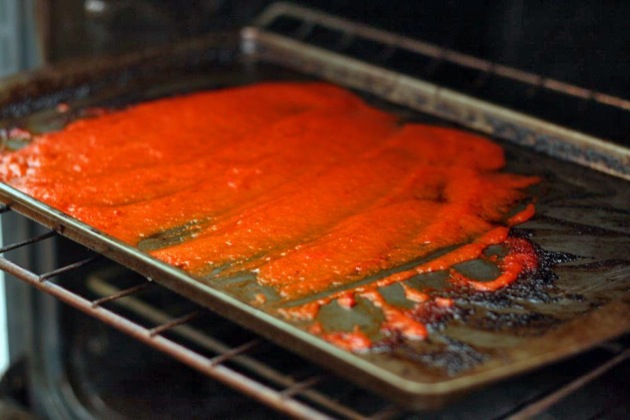 At 300 degrees, my paste was cooking pretty quickly -- to the point that some of the tomato was sticking to the pan and burning (see picture above).  Once I turned the heat down to 200, it no longer burned.  So keep a close eye on the tomatoes during the first, hotter stage. 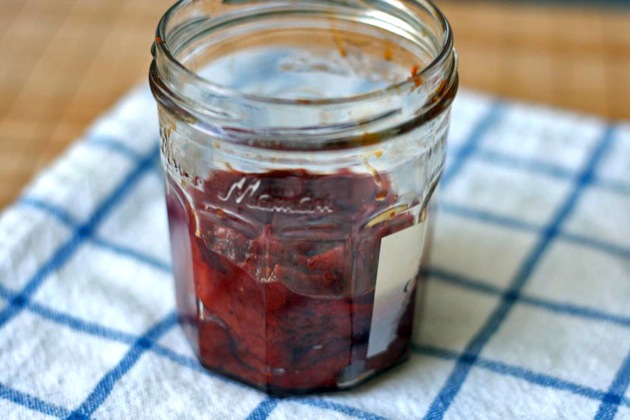 Transfer to a sterilized jar and push it down to the jar with a sterilized spoon. Cover with olive oil completely. Refrigerate.