Under Pressure: How To Make Superb Chicken Stock In About An Hour

What if there was a method for making stock that not only dispensed with the time-consuming part, but also produced something that tasted better? 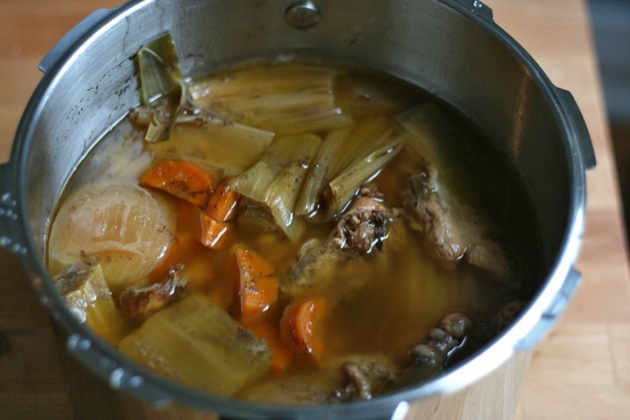 In practice, significantly more flavor is extracted from the meat. [...] When combined with good ingredients, these factors produce remarkable stocks in significantly less time.

I started making stock when I realized that you could stash the carcasses from roast chickens in the freezer and save them up for an empty Sunday and a few hours of simmering. That certainly got me past the cost barrier that I think keeps a lot of people from making stock at home. I was just making good use of something I had anyway. There is absolutely no doubt that roast chicken stock has the body and richness a store-bought carton never has, and it's a lot more satisfying.

But what if there was a method for making stock that not only dispensed with the time-consuming part, but ALSO produced something that tasted better?

If the chef at London's Fat Duck restaurant, Heston Blumenthal is to be believed--and I would stake quite a lot of the accuracy of Heston Blumenthal's claims, which we've used over and over again on this blog--this method does exist. In fact, a superior chicken stock to traditional methods can be made in less than an hour . You read that correctly: not just easier, and faster, but superior also .

I n other words, we're not cutting corners to save time. We're actually making something better than the original. I find that rather mind-blowing. In fact, it's now possible to make a stock on the same night you roast the chicken without staying up long past your bedtime. 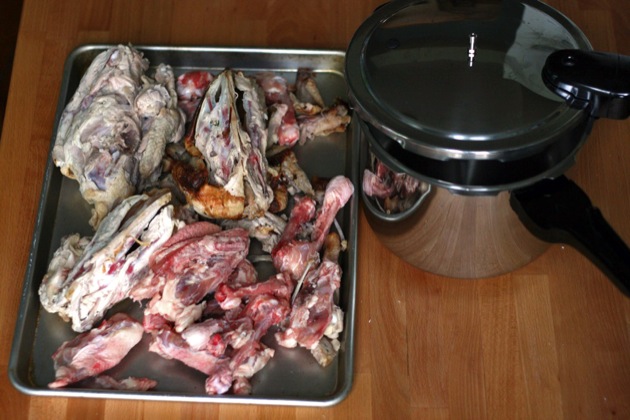 I've had a pressure cooker for a few months now, but I've yet to use it. Initially I thought I'd cook a lot of very-economical dried beans with it, because I heard the cooking time can be cut down significantly, but ever since the 90-minute no-soak beans revelation , I haven't bothered to cook them any other way.

But I had to pull it out of its box to test this very exciting, rather revolutionary idea. 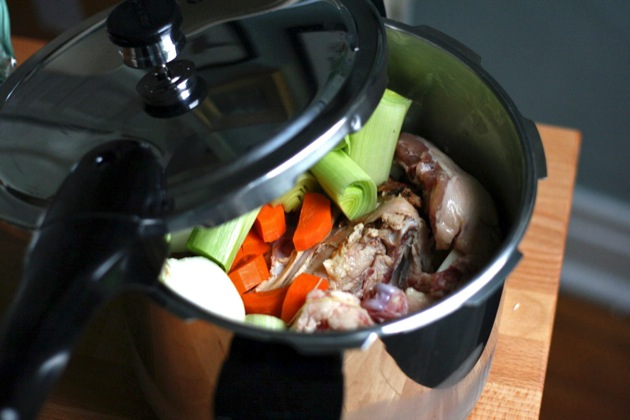 I'm no scientist, but here's how I understand the pressure cooker stock.

A pressure cooker is essentially a pot with a seal on it, which allows you to increase the pressure inside of the pot when you put it over a burner. Why is this beneficial? Atmospheric pressure has a direct effect on the boiling temperature of water (which is why people who live in the mountains have to cook their pasta longer: the water begins to boil well below 212 degrees Farenheit, sometimes as low as 190 degrees, and that's as hot as they can get it). It's just the opposite with a pressure cooker: while high altitudes subtract air pressure, a pressure cooker increases it. This means that liquid will boil at higher temperatures (the average pressure cooker has 15 pounds of pressure, and a subsequent boiling point of 250 degrees Farenheit). This means that you can cook a stock inside a pressure cooker much hotter than normal without it boiling. Boiling would make the stock cloudy.

I'll let Heston take over from here, the passage I was reading in the Fat Duck cookbook that inspired it all.

In practice, significantly more flavor is extracted from the meat because the rate of diffusion increases with the higher temperature possible in a pressure cooker. In addition, because of the higher temperature, Maillard reactions accelerate, producing more meat flavor. When combined with good ingredients, these factors produce remarkable stocks in significantly less time.

So two things happen: the higher temperature extracts more flavor from the bones and meat, and a higher temperature also produces more "browning" of the flavors through the Maillard reaction, which is what the reaction is called when meat caramelizes during searing. Apparently, contrary to popular belief, the Maillard reaction can happen in the presence of water (this belief leads to the common practice of drying a piece of meat thoroughly before browning it in the pan, so that it doesn't steam itself). This wisdom is true because normally the presence of water makes a maximum temperature of 212 degrees; but in the world of a pressure cooker, the water gets much hotter than that.

But I like to think of the pressure cooker as a time machine: inside it, time is passing at a faster rate than in the real world. Under pressure, the laws of cooking time are skewed and subverted.

I made my stock using 3 pounds of chicken parts, frozen over the last month or so, partially from leftover roast chicken carcasses and also some unroasted bones. (It's a good idea to throw in a package of fresh chicken wings; stock made only from bones has plenty of body because of its high gelatin content extracted from the bones, but meat adds a lot of flavor.) This all fit snugly in a 6-quart pressure cooker with a sliced carrot, a white onion, and a roughly chopped leek. I covered it with 2 quarts of water and set about to read the rather daunting instructions for how to use a pressure cooker.

(It's a perfectly safe piece of cookware, but you are dealing with controlled pressure and therefore the potential for explosion; read instructions carefully.)

It took about 15 minutes for it to come fully "up to pressure," at which point a little valve rises up and locks into place. Most recipe cooking times begin once the pot has come "up to pressure"; I proceeded to cook the chicken stock for about 55 minutes from that point. Some recipes call for 45 minutes, some for an hour.

You might notice that there was no skimming involved, a huge no-no in stockmaking (as the bones come to a boil, a gray sort of foam is released and just about every recipe calls for this stuff to skimmed away and discarded.) There is a [ lengthy discussion about stock skimming on the message board eGullet ](http:// http://forums.egullet.org/index.php?/topic/129822-pressure-cooked-stocks/pagest30?s=850725d0ea40bf5c115285d0bdeea798) , and many people argue that skimming is actually completely unecessary, and doesn't actually introduce any "off" flavors. Side-by-side tests confirm it. I certainly didn't notice any problems in my pressure cooker stock, and actually noticed that most of the foamy scum stuck to the sides of the pot and stayed there when I poured it off. 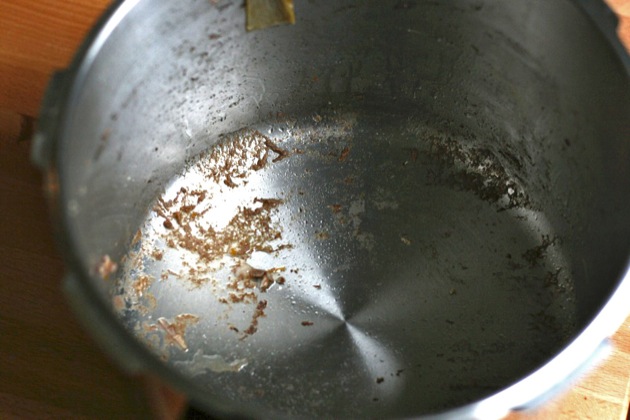 Once the allotted time has passed, you simply turn off the heat and allow it to the pressure to disipate naturally, then open the cooker and reveal what's inside.

The color was most amazing: a deep, rich brown. It was also remarkably clear. I ladled the liquid carefully, then strained the rest and cooled it. 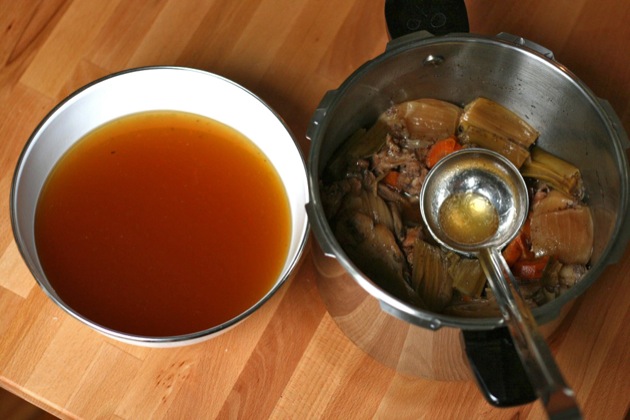 A couple remarkable things I noticed.

First, the vegetables were undisturbed and had not disintegrated like they normally do when I make stock. The cuts I'd made before cooking were intact, which proved that there wasn't any disruption from boiling during cooking.  Everything was just as I'd left it before putting on the cover.

Second, the bones were soft and almost crumbly. They had given absolutely everything to the stock. I could take any of the bones and, using two fingers, crush them in my hand. 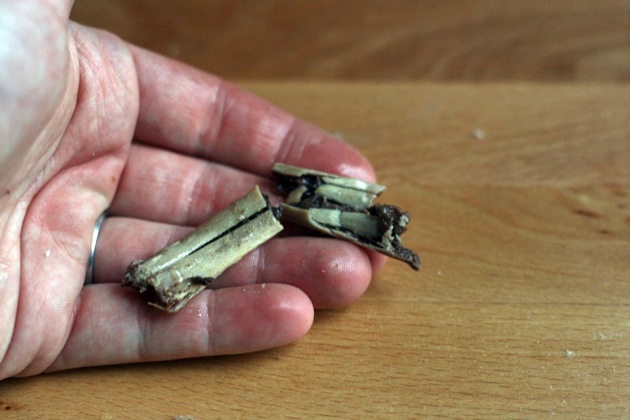 The pressure cooker absolutely disintegrated them. Why, I don't know. I'm not sure if this would happen to bones simmered at lower temperatures for many hours, or if it's a function of the pressure.

But I do know that this is the fastest and--though I didn't do a side-by-side test--possibly the most delicious stock I've ever made. And that I'll probably never make stock the traditional way again.  With a tool like this, I don't really see the point.