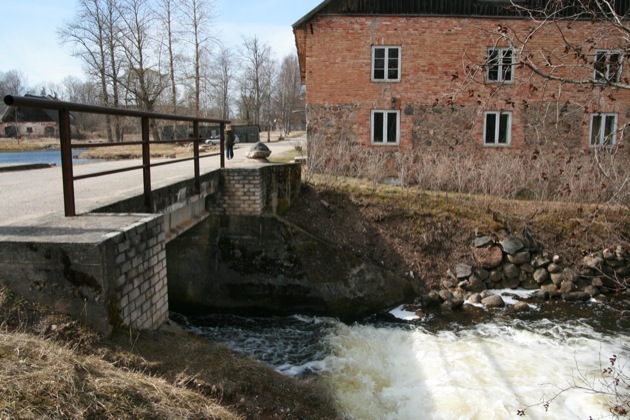 I knew next to nothing about watermills before heading down to see one in southern Estonia, so I had an open mind.  The website promised a tour, a glass of milk and fresh warm bread.  So when the offer of a ride down came up, I had little reason to turn it down.

When we arrived, we found an idle lake reflecting the brilliant blue sky, clouds tossing across the sky, and a brick building with what seemed to be about 15 front doors.  None of the doors were the same, all different heights and widths, the walls built and rebuilt over the course of decades, a haphazard collection of different stones and bricks.  As we waited around for our guide to arrive, peering into windows and trying different locks, I half expected one of us would be swiftly pulled in by a mechanical hand or fall through a trap door. 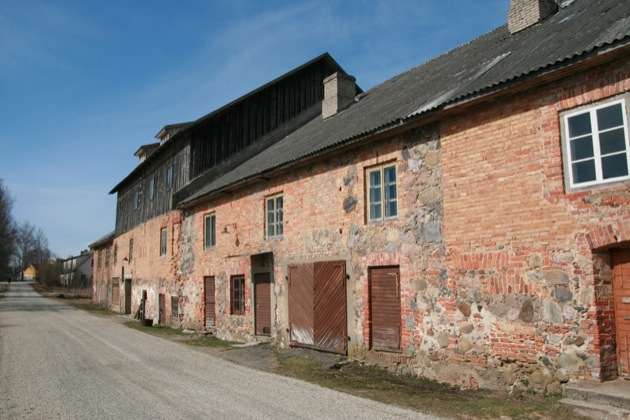 But nothing really could have prepared me for the madness we'd discover inside those walls.  Inside was a rambling 4-story madhouse of wooden levers, pipes, pulleys, slides, chutes, tubes and gears which has left me utterly unable to explain to you how grain milling actually works.  The Hellenurme Mill is not currently in operation (the family is working to rebuild it these days), so it's hard to say how much of the machinery is old and dormant and how much is actually essential to the milling process.  But nevertheless I find it quite interesting to see these sorts of operations which reveal a little more about how food is made and processed, to find out where it comes from. 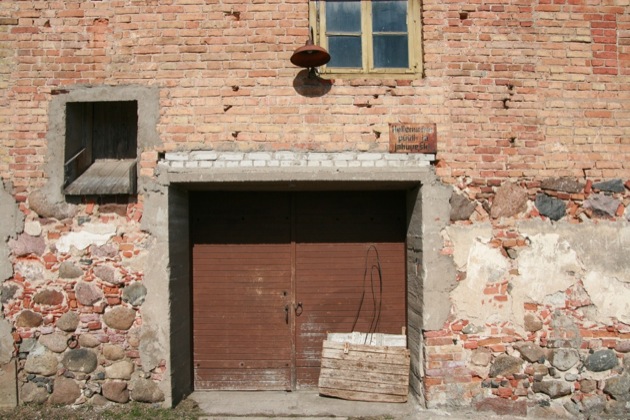 As we toured from floor to floor, from one tube to another sorting mechanism, none of it really became clearer.  Mostly I just felt like I was trapped in a funhouse.  Though the tour was conducted 90% in Estonian (and my grain-milling vocabulary is not yet up to snuff), I am equally sure that had I actually understood what this woman was going on about I would have been no less aware of what the hell was going on. 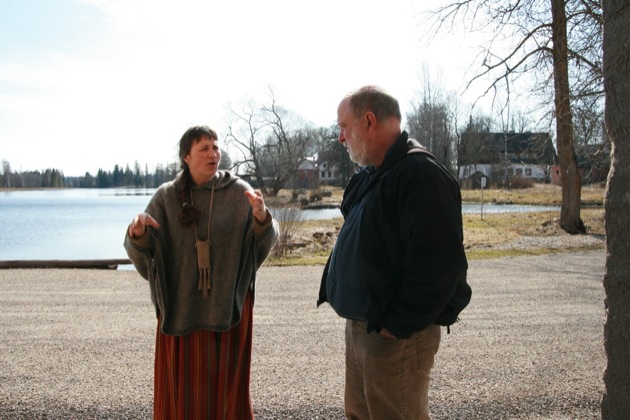 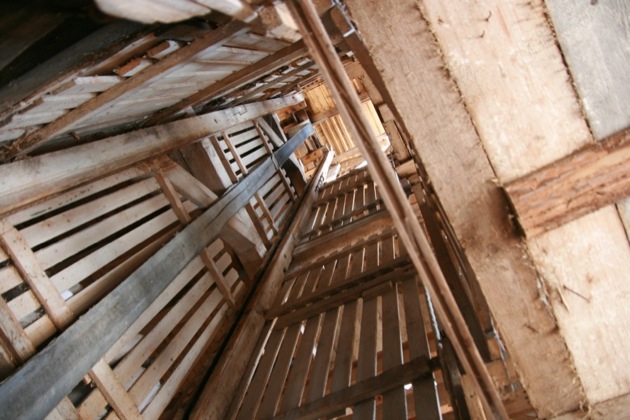 The mill was originally built in 1880s by a Russian landowner of Baltic-German heritage, back when southern Estonia was part of Livonia.  After being nationalized following the independence of Estonia in 1918, then bought by a man named Karl Rudolf Veski from the state, it was again returned to state hands under Soviet occupation for the next 50-odd years.  After Estonia's second independence in 1991, Veski's descendants sought their right to take the mill back; though it took close to a decade, they were in the end successful. 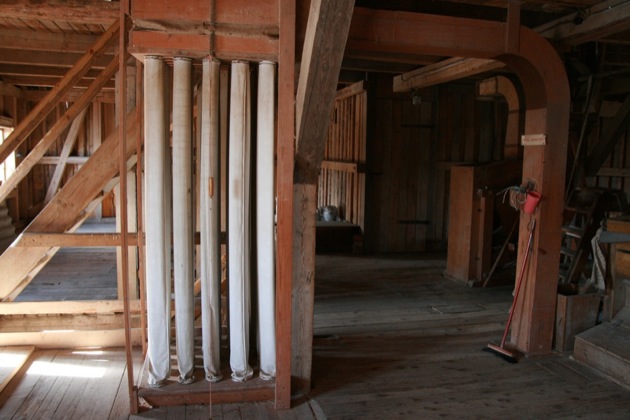 Because I couldn't begin to explain what these pictures all mean or how they fit together, I figured it's best to simply post them.  The process all happens, from washing to grinding to sorting by degree of fineness. 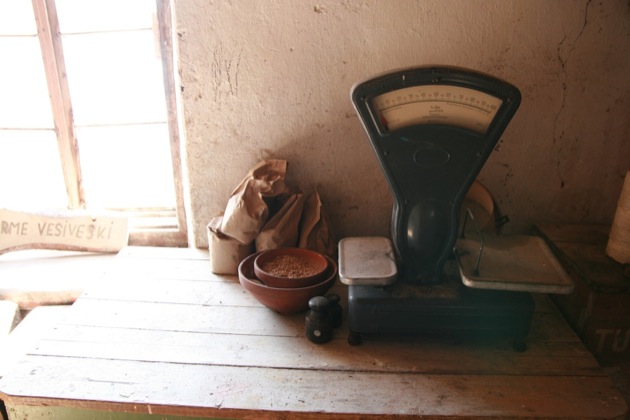 What struck me most touring this decidedly old-school operation (watermills are quite rare in developed countries these days) was that whoever built this thing was some kind of genius.  The amount of engineering imagination to make it all is staggering, and all of it powered, in the end, by a single gear rotated by a river.  From one wheel to another pulley to the next, on to run literally thousands of simultaneous operations. And it all begins with this chute at the top, making its way through washings, grinding, sifting across different screens to sort all the way to the bottom. 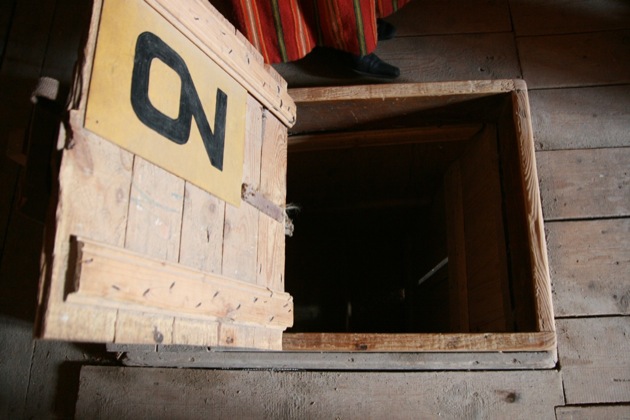 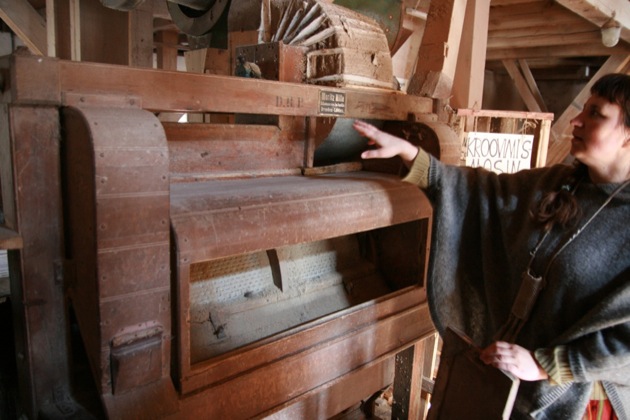 Here's one example of the engineering genius I mean-- dried peas are quite common here in Estonia, often ground into flour.  On the third floor of the mill, our lovely host and tour guide--the grand-grand daughter of the man who bought the mill from the Republic of Estonia in 1932--showed us this round, tall swirling piece of metal that looks a bit like a sculptor's interpretation of a tornado. 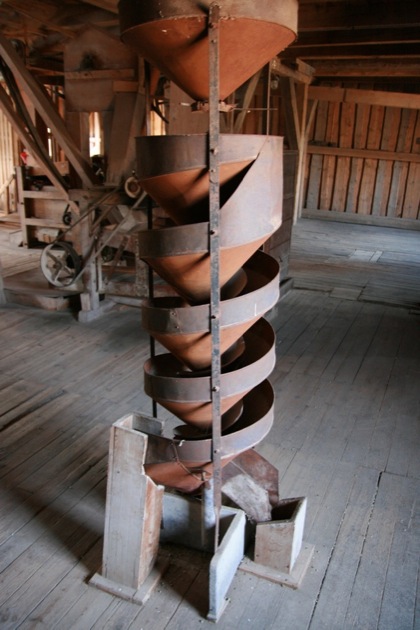 A dropped handful of dried peas clinked loudly into the top from her hand, then rolled around the spiral like marbles as the ominous beginning of a Rube Goldberg machine .  As they clinked into different bins I realized each pea was being sorted by size and weight according to how they'd rolled around the spiral: sorted by their centrifugal force. 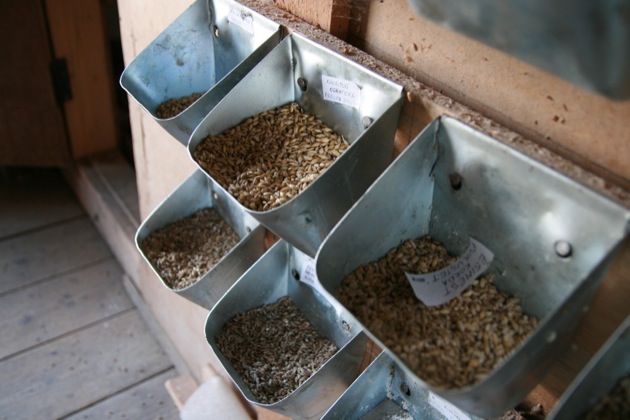 The second half of the tour was almost more fascinating, a preserved workroom from soviet times complete with flags saluting Lenin, all left as if the place had been evacuated without warning. 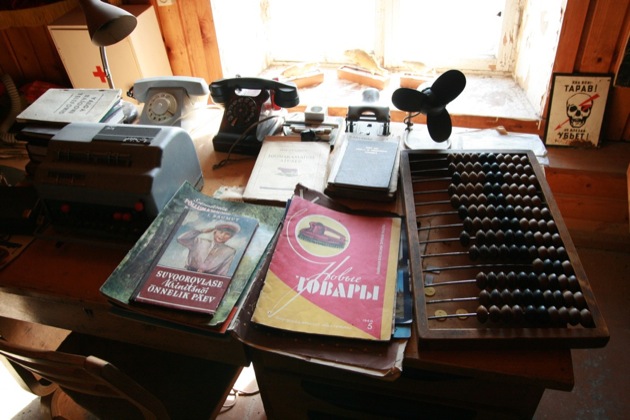 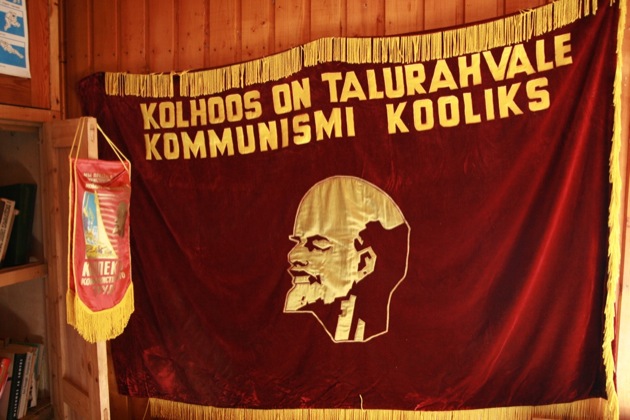 And living quarters for people who used to work in the mill, including this recipe sheet tacked on the wall. 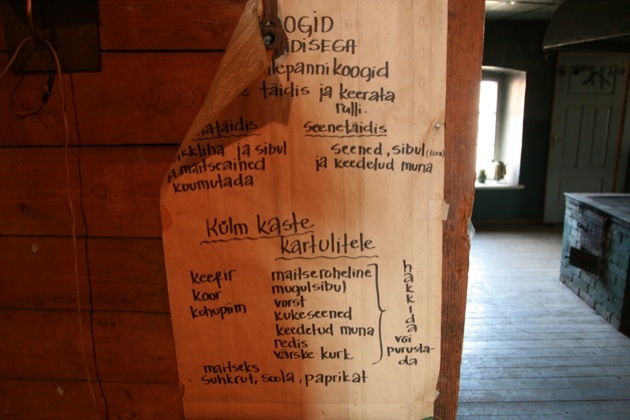 The rolls we ate were, as promised, wonderful, made with half white and half whole wheat flour and studded with seeds. 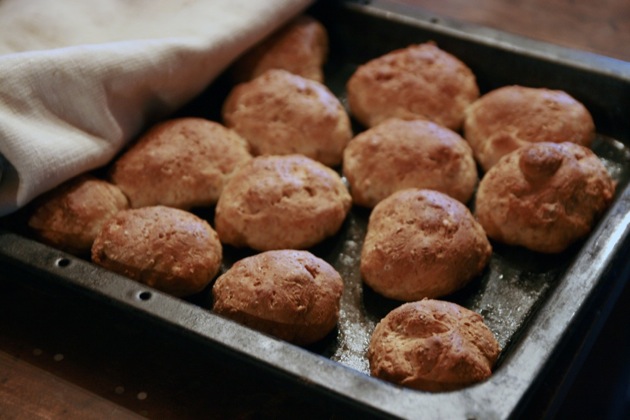 Instead of a glass of water we washed them down with birch juice (also known as birch water), which is gathered simply by draining sap from a birch, just as sap is harvested from a maple. 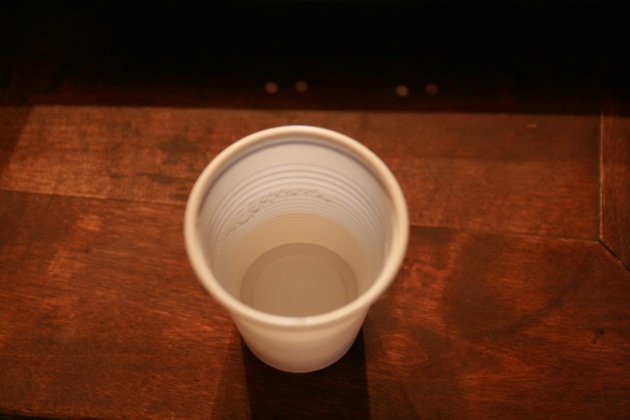 It's gently sweet and woody, and apparently tremendous for one's health.