An afternoon learning about "Grahampagne" 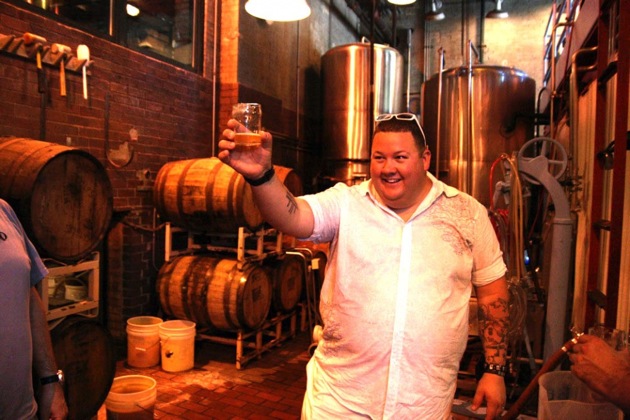 Through a heavy, metal door with "Brewery Employees Only" slapped on the front, I was led into a warm, steamy room where Goose Island beer is made. I side-stepped hoses and puddles of water and found a capacious space filled with slanted light; up above, at the top of a skinny ladder, great tanks of beer were lined up at various stages of aging and fermentation on a platform, were Goose Island's brewmaster Jared was talking to Chicago chef Graham Elliot.

Graham Elliot is one of a series of restaurants that have participated in Goose Island's chef brewing program (Others have included Mindy Segal of Hot Chocolate, Rick Bayless of Frontera Grill, Topolobampo and XOCO, and Paul Kahan of the Publican). In each case, a chef will meet with brewmaster Jared Rouben and decide on the kind of beer they'd like to make. 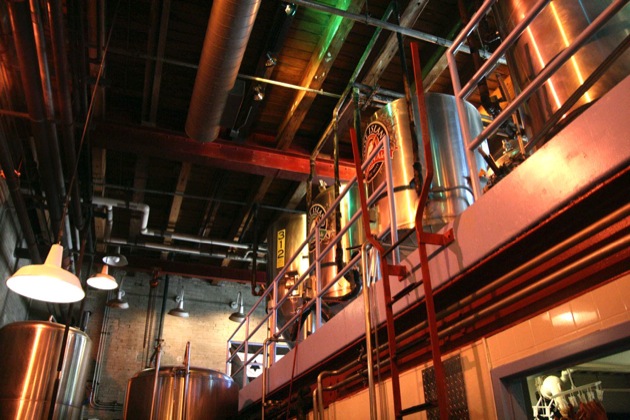 Graham Elliot takes an unusual approach to beverage pairing--”You're as likely to find us pairing something with chocolate milk"--so even though it’s a beer, that doesn’t mean it has to taste like anything you’ve had before.

The start of their collaboration began with Jared: in two heroic sessions, he ate the entire menu at Graham Elliot in order to get a sense of what kind of beer they would make. Then Graham came to Goose Island and tasted different kinds of beer. Together, they settled on a lighter style--a Kristal Wit Belgian ale--that would appear early on in the tasting menu, as a kind of alternative to champagne to pair with lighter courses like fish or herbs, or as an apertif. The beer was to be light, floral, and very aromatic. 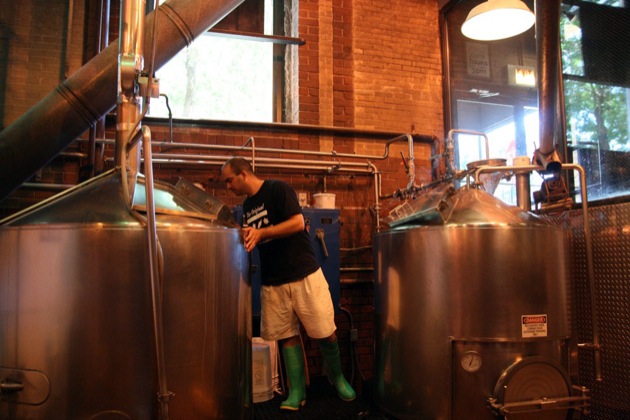 To create the flavor profile Jared and Graham are after, the ale is steeped in aromatic fruits and spices at a very low temperature (45 degrees F) for a significant amount of time, just long enough so that the flavor is prominent, “but not so long that it's over-extracted or tannic,” as Jared explained. Cardamom, chile, pineapple, lychee, and lemongrass are all apart of the mix process.

When I got an email invitation to hang out at Goose Island with Graham and learn about the beer he was brewing, I leapt at the chance. I don't know a lot about beer making, and, it turns out, neither does Graham. (I asked Graham if he has ever brewed beer at home, and the answer was no.) In fact, he was learning as much about the process by which beer is brewed as I was. From the grain mash to the first taste of the unfermented product, it was all pretty fascinating. 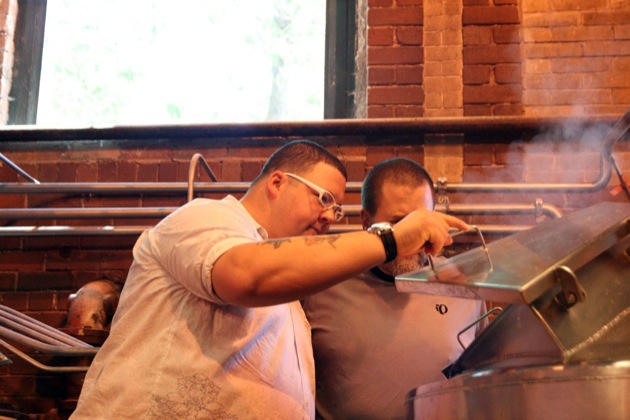 The first stage of the process is to take the grains and steep them in hot water, which happens in one tank.  This will create a very sweet liquid, known as "wort," and all that sugar will eventually convert to alcohol. 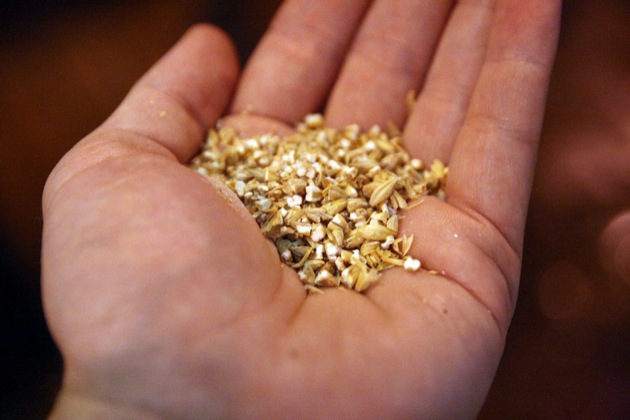 Here's an example of what a beer grain will look like before steeping with water.  We munched on some of this -- tasted like of malty and nutty.  Though it's pretty tough stuff, I could see enjoying this in a bowl with milk, or cooked down as oatmeal! 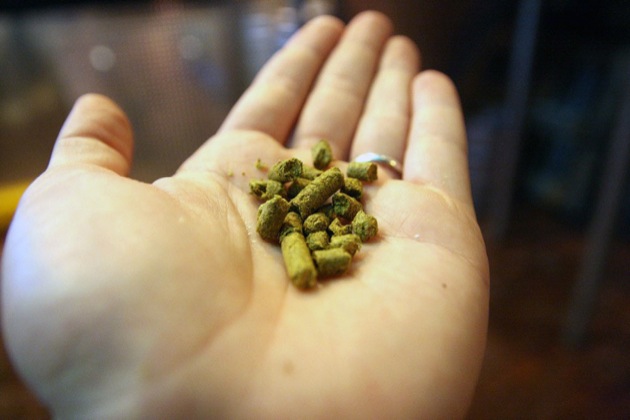 And here is what hops looks like -- Jared gave us all a handful to inspect.  Luckily, before I tossed them in my mouth, he warned us not to eat them.  "It would basically wreck your palate," he said, due to the incredible bitterness. 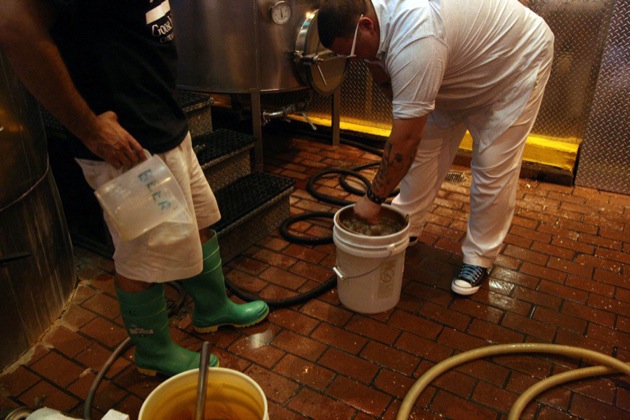 Once the sugary mixture is extracted from the grains, Chef Graham brought a bowl of it into an ice bath to cool down--both so that it would be easier to taste, and also to get an accurate reading of the sugar content.  It is cooled down just like you would cool a hot stock, in a metal bowl (which conducts temperature well), stirring often. 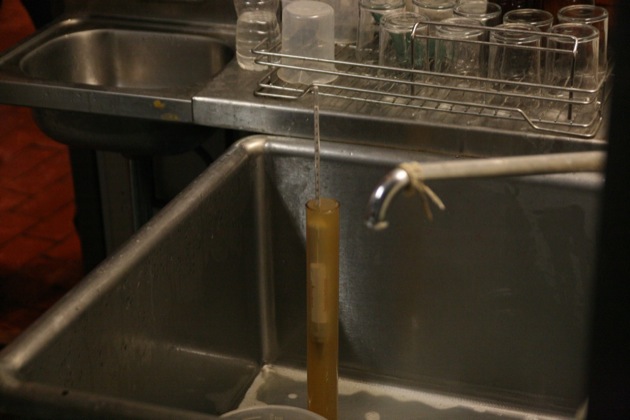 Jared then transferred the brew to a device that measures the sugar levels, a hydrometer, ensuring that they are in the range he wants.  Too much sugar, and the brew will be too alcoholic.  Once the yeast is added for the fermentation process--about two weeks in this case--it will quickly eat all the sugar to produce the alcohol.  Then the steeping process will happen with the aromatics that Jared and Graham have chosen. 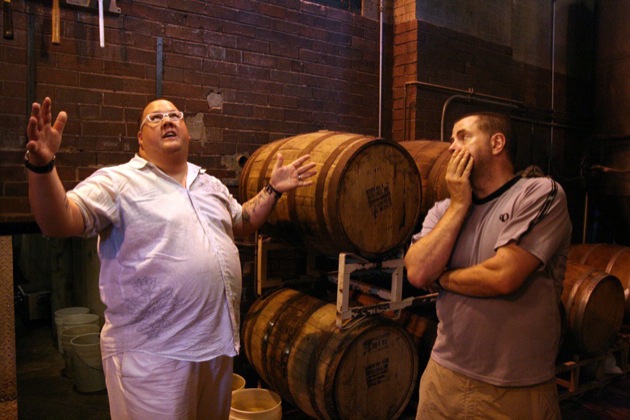 Graham and Jared's beer is almost done now -- fermentation is soon, if not already, over, and it is steeping with the aromatics.  It will be available shortly at Goose Island Cybourn as well as Graham Elliot.  Personally, I can't wait to try a glass.