The Comfort of Eggs in a Basket 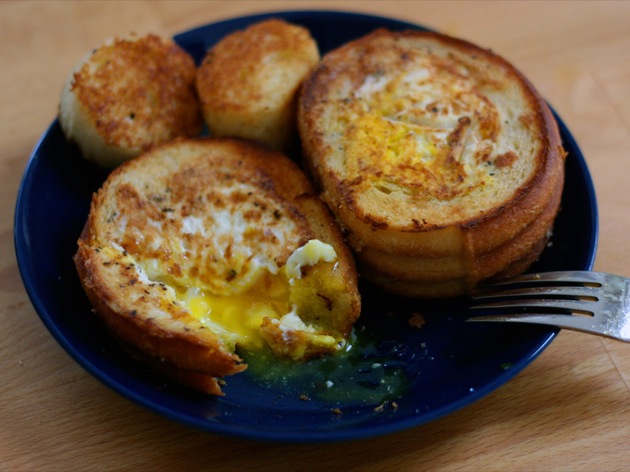 Eggs in a basket was the first meal I ever cooked. I was in 5th grade, and it was a Sunday morning at my best friend's house after a sleepover. We woke up hungry, and for some reason his parents weren't home. This confused me--my parents would never do that--but more important than confusion was the fact that I was terribly hungry, and I didn't see how that problem was going to be solved, since his house never had any cereal in it.

"We'll make eggs in a basket," my friend said, pulling out a loaf of bread, a jug of oil, and a carton of eggs. You mean, we'll be cooking? I wondered. This was a novel idea. I would later find out that he'd only watched the process before, never having actually cooked it himself. No matter. We found a skillet and turned the heat to high. It was the beginning of my sometimes reckless, ask-questions-later approach to cooking.

The resulting breakfast was awesome: runny yolk and crisp bread dripping with oil (we filled the skillet so much oil it was basically deep-fried). And since then I always prepare it with fondness. More importantly, it is one of the best 5 minute meals on the planet, and one of the only meals that literally takes 5 minutes. There is no hidden prep work. You will likely be eating a few minutes after hunger sets in.

Ideally, make this with slices of toast cut thick. Over time I've found that for large eggs, 1-inch thick slices of bread with a 2" x 2" hole is the ideal vessel for the egg . This allows, over medium heat, for the bread to reach just the right golden crispness, the egg whites to fully set, and the yolk to remain nicely runny so you have something to dip in.

I guess I have a fondness for very fast and simple eggs + bread dishes, my love of "eggy bread" evidence of this, which is basically French toast without sweetness or spices. Maybe it's because when I'm hungry, I'm hungry, and it's a substantial comfort to know that a dish like this--and one that tastes as good as this--is just 5 minutes away. I know that hunger won't have dominion long. Eggs and bread is my protector.

What are your go-to quick meals when hunger looms?

Eggs in the Basket 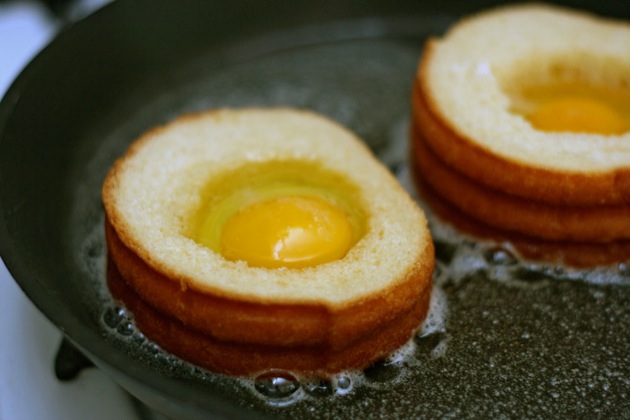 Cut a hole in the slice of bread about 2" x 2", reserving the piece you cut out. Heat the fat in a skillet over medium heat until quite hot (if using butter, the foam should start to subside) and add the bread and the cut-out round in the skillet next to it. Crack the egg into the hole and season with a good pinch of salt and pepper. Cook until the bread is golden underneath; flip carefully and cook the other side until also golden, seasoning with more salt and pepper. Don't forget to flip the cut-out round, too.