How to make the best burger at home. 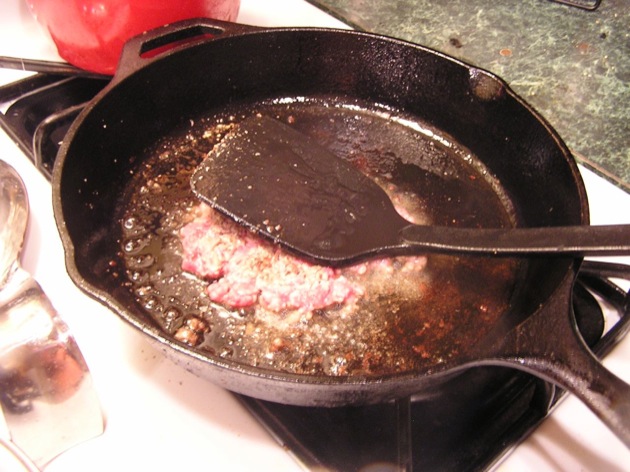 You know the burger obsession is going off the deep end when semi-serious discussion takes place over the burger making skills of a cartoon .  Please stick with me.  This cartoon happened feature J. Wellington Wimpy, the burger-loving sidekick of Popeye.  Hamburger America author George Motz found this clip and was there to comment on Wimpy's burger making skills: "Notice how even in cartoons back then they got it right and scooped the beef, not hand pattied it. "

On the basis of this cartoon I went out and bought some meat, ground it, and tried to make a burger like it was 1936.  But problems popped up the moment I tossed the meat in.  I realized I'd have to form the patty into some kind of shape to fit into a bun, and that that would inevitably mean I'd have to press down on the meat.  This I just couldn't do.  Isn't one of the burger commandments: "thou shalt not press down"?

But then I came across a passage in A Hamburger Today where editor Adam Kuban was championing just that.  He calls it the "Smash Technique" and says it's the key to thin Midwestern style burgers.  He goes on to say:  " I've never had a chef-driven burger anywhere near as good as a lot of the mom-and-pop places in Kansas, where I grew up. And all my favorite places there practice the art of the on-grill smash." 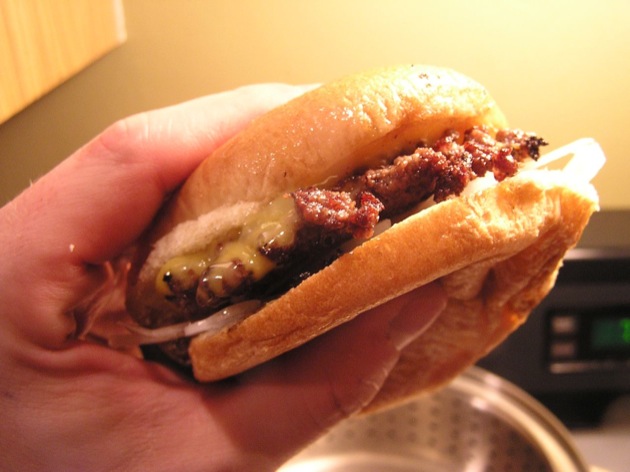 Those are MY favorite burgers.  As a good Midwestern kid, I was raised on these greasy spoon specialties, and have been trying to make them for years.  I've failed every time.  Burgers tend to puff up in the middle when cooked, so matter how thin I originally made the patty it would end up thick and dry. It had never occurred to me press down on the patty.  Could the smash burger really be the key to my burger nirvana?

I thought I had found the secret to best burger with the Harold McGee approved " Quick Flip Technique ", but it ends up that that was only the key to one kind of burger.  It's an excellent method for the thicker New York style burger.  But the smash technique, a method so seemingly antithetical to a good burger, is the key to another kind.

As I started looking into the smash technique a few things struck me.  The smash only occurred once and that was right at the beginning when the juices of the meat were cold.  While a little liquid would certainly be pressed out, most of the fat would remain solid and inside the patty.  Finally, after watching a video of how even the Shake Shack used the smash technique , I really had no other choice. 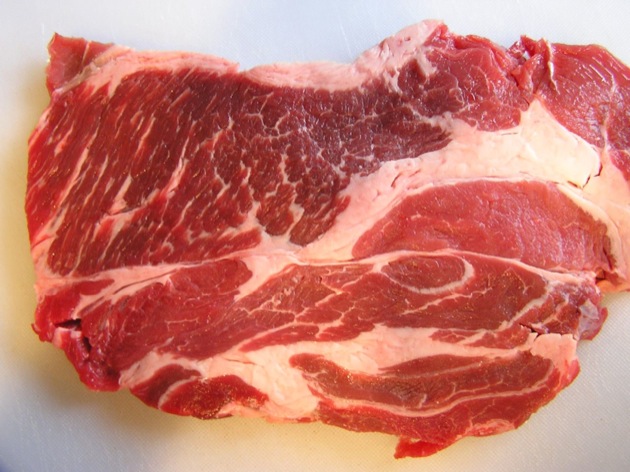 I bought a bunch of chunk, busted the Kitchen Aid, freshly ground the meat into a large bowl, and then immediately tossed it straight onto a smoking hot skillet. 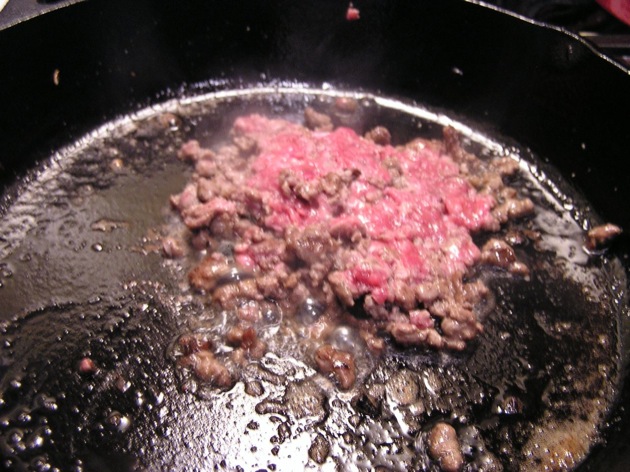 When I pressed down the burger stuck to my spatula, and then broke apart into dozens of little bits.  When I flipped it, the burger broke into a dozen more. 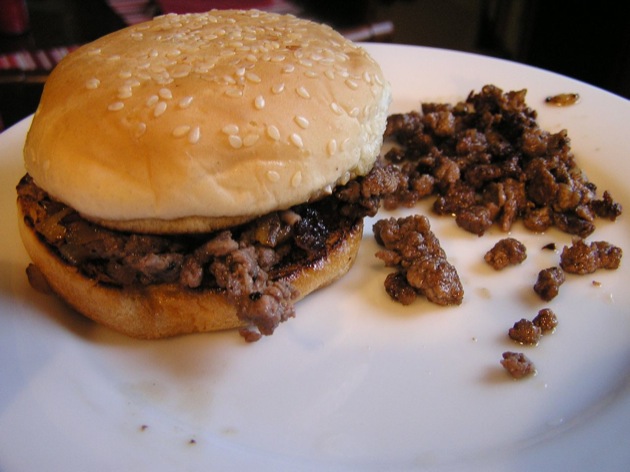 When I finally got a bun nearly half of the beef had broken off and turned into glorified browned beef.  Though the small bit that did stay together had an incredible sear, it could hardly be called a burger.  There had to be a better way. 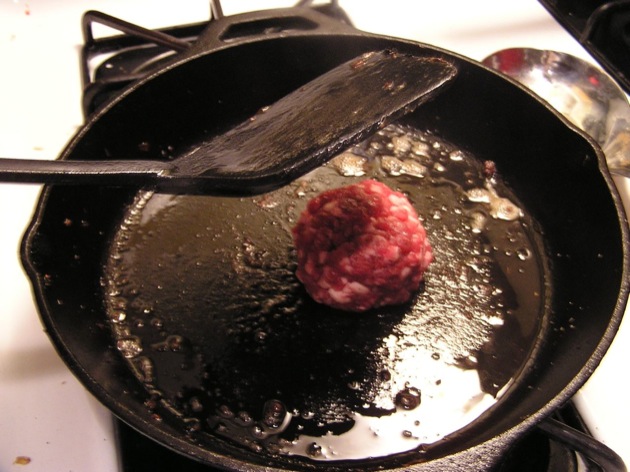 Next, I tried forming the beef into loose balls, hoping that that would keep the patty together when it was pressed down.  I also lubed up the spatula with a hell of a lot of canola oil to try and keep it from sticking to the meat. 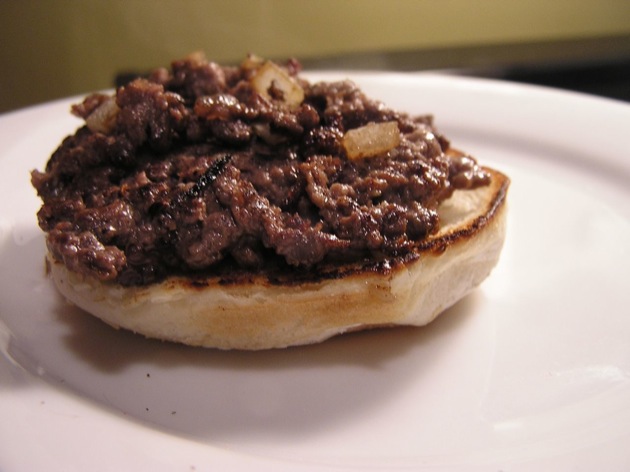 But I ended up with the same result. The beef broke apart when I pressed down. I piled some of the bits on top and they were delicious, but this getting out of burger territory. It still wasn't right.

The Smash Technique had some explaining to do.

Over the holiday break while traversing the Midwest, Abby and I stopped in a Steak and Shake for a quick bite to eat. While we waited for our milkshake, I spent the entire time staring down the grill man and his whole operation. I've always liked Steak n Shake even though it is a chain. And to my surprise they utilized none other than the smash technique. I couldn't believe my luck.

They placed a small golf ball sized hunk of ground meat on the grill and then let it cook for approximately a minute.

Only then did they flip it and smash the living daylights out of it. The cooked side held the patty together. The smashing occurred on the uncooked side, leading to only marginal moisture loss. This was it.

First thing I did when I got home was try out this new technique, and it is flawless. I created flat, highly seared burgers with absolute ease. The crunchy edges led to juicy interiors. Complete with a slice of American cheese and raw onions, I could visit the burger joints of my youth right in my Chicago apartment. Not a bad deal. 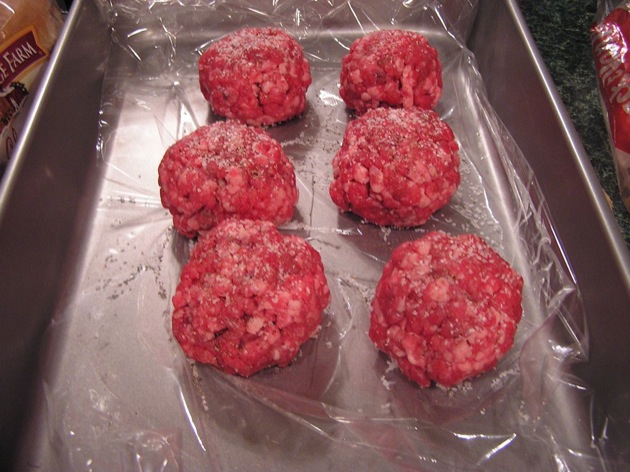 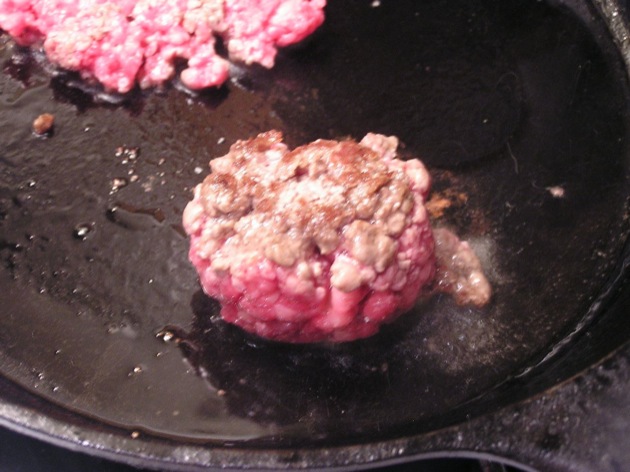 Preheat an iron skillet to high.  Set a ball or two in, salt side down, and cook let it cook for one minute.  Season the top with more salt.  Flip it. 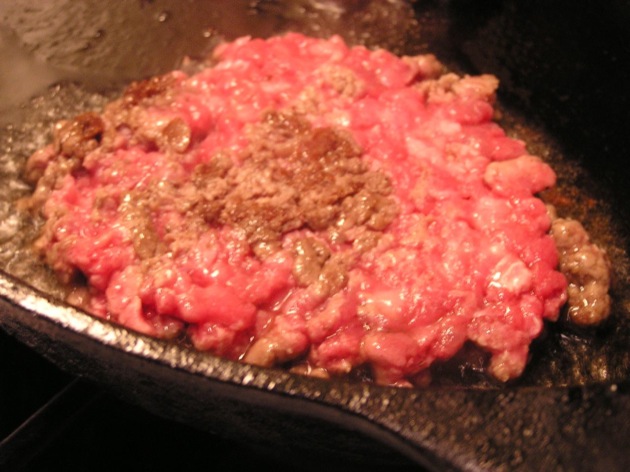 Smash down the ball until it is very thin.  Cook for another minute.  Flip and top with a piece of cheese if wanted, and cook for about another minute. 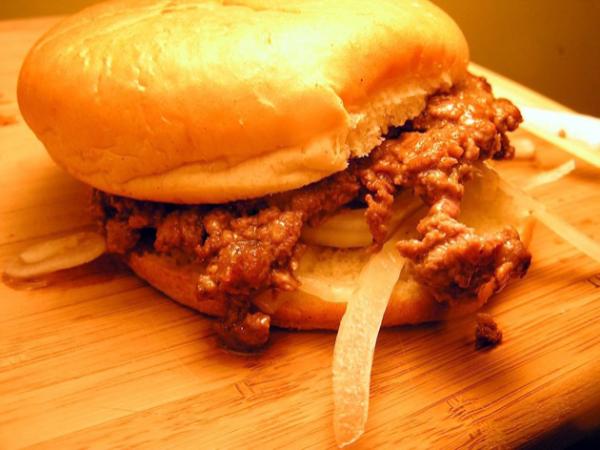 Place in a bun with some raw onion, ketchup and mustard.